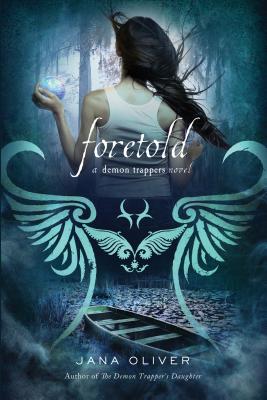 This is book number 4 in the Demon Trappers series.

In FORETOLD, the fourth Demon Trappers novel by Jana Oliver, Riley faces the final battle for humanity and Beck's heart—and Hell is the least of her problems

Now that Riley's managed to (just barely) fend off Armageddon, everything's changed. Well . . . most things. After their passionate kiss before the big battle in the cemetery, Beck is back to treating her like a little girl, as if nothing ever happened. While she'd love to just tell him off and move on, Riley vowed to take care of Beck the way he's taken care of her since her father's death—but she's about to get a whole lot more than she bargained for. When she's commissioned to go with Beck to his hometown and help him care for his dying mother, they stumble too close to a dark and murderous secret, one that Beck fears will drive Riley away from him forever. As chaos breaks loose, Riley may be Beck's only hope for redemption . . . and survival.

Meanwhile, up in Atlanta, it's quickly becoming clear that Heaven may have won a battle, but the war is far from over. Riley and Beck face a stormy future, as Lucifer's ex-right-hand-man, Sartael, proves himself to be more resilient than anyone thought. He has Atlanta in his grip and is about to begin a brutal war with the prince of Hell. As the seconds tick down toward a final confrontation, it's up to Riley and the man she loves to finally defeat their old enemy, or lose everything they've fought for.

Jana Oliver is the award-winning author of the young adult urban fantasy series Demon Trappers, including The Demon Trapper's Daughter and Soul Thief. She is also the author of the Time Rovers series. She’s happiest when she’s researching outlandish urban legends, wandering around old cemeteries and dreaming up new stories. An Iowa native, she lives in Atlanta, GA.

“Oliver delivers a book that will delight her series fans. Adventurous and hypnotic . . . adds more drama and adult content to this popular series!” —RT Book Reviews (4 stars) on Forgiven

“The rock ‘em-sock ‘em, cliffhanger ending . . . A strong female protagonist and equally strong male characters will make this title popular with young adults of both genders.” —VOYA on Soul Thief

“The second Demon Trappers book is even better than the first. The demons are more wicked, the love is more epic, and there's even a twist ending that has me clamoring for the next book.” —RT Book Reviews (4 ½ stars) on Soul Thief

“With a strong female heroine, a fascinating setting, and a complex, thrill-soaked story, this series is off to a strong start.” —Publishers Weekly on The Demon Trapper's Daughter

“Oliver offers plenty to appreciate in this inventive twist on the story of a girl breaking into a man's career field...Readers will delight in the novelty and eagerly await the next book in this proposed series.” —Booklist on The Demon Trapper's Daughter

“Riley Blackthorne is all heart and no nonsense! She will no doubt join the ranks of the toughest, smartest urban fantasy heroines of all ages.” —Jeri Smith-Ready, award-winning author of Shade and Shift, on The Demon Trapper's Daughter

“This was a really entertaining Young Adult Urban Fantasy novel with interesting characters and the kind of writing that has you wanting to read the entire book through in one setting...I recommend this to the Young Adult and Adult crowd as well.” —Affaire de Coeur (4 stars) on The Demon Trapper's Daughter