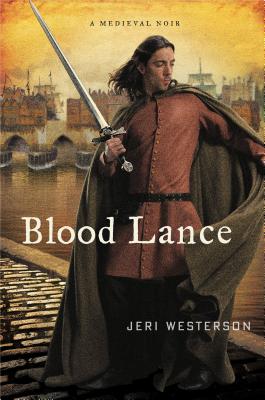 By Jeri Westerson
Unavailable to Order
Out of Print

This is book number 5 in the The Crispin Guest Novels series.

"Among the most courageous and compelling protagonists at work in fictional detection." -Richmond Times-Dispatch

Crispin Guest, returning home after a late night, sees a body hurtling from the uppermost reaches of the London Bridge. Guest's attempted rescue fails, however, and the man-an armourer with a shop on the bridge-is dead. While whispers in the street claim that it was a suicide, Guest-known in certain London circles as The Tracker for his skill in solving puzzles-is unconvinced.

What Guest uncovers is that the armourer had promised Sir Thomas Saunfayl, a friend from Guest's former life, that he would provide him something that would make him unbeatable in battle, something for which he'd paid a small fortune. Sir Thomas believes that the item was in fact the Spear of Longinus - the spear that pierced the side of Christ on the cross-which is believed to make those who possess it invincible.

Complicating matters is another old friend, Geoffrey Chaucer, who suddenly comes to London and is anxious to help Guest find the missing spear, about which he seems to know a bit too much. With various forces anxious to find the spear, the life of Sir Thomas in danger and perhaps the very safety of England hangs in the balance, Guest and his apprentice Jack Tucker must navigate some very perilous waters if they are to survive.

JERI WESTERSON is the author of books featuring Crispin Guest, including Veil of Lies, Serpent in the Thorns, The Demon's Parchment, Troubled Bones, and Blood Lance.  She lives in Menifee, California.

“The noir aspect of this mystery is well-done.... the imagery of medieval London is almost tangible. Even better is the afterword, regarding Christian relics that may or may not be real — a little history served up with your mystery.” —RT Book Reviews