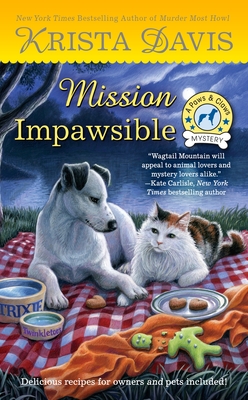 This is book number 4 in the A Paws & Claws Mystery series.

In the pet-friendly town of Wagtail, Virginia, there’s no love lost when Holly Miller meets her match in a murderer...

Holly and her grandmother, Oma, are working their tails off to prepare the Sugar Maple Inn for an upcoming matchmaking event for pet owners. While Holly has no interest in pairing up, Oma plans on playing Cupid and finding someone to warm her reluctant granddaughter’s heart.

Unfortunately, one man Holly does meet is cold—dead cold—and he has a personal letter from Oma in his pocket. As suspicion is cast over the inn's guests, Holly—with the help of her furry friends, Trixie the Jack Russell and Twinkletoes the cat—must fetch the real killer, or she may soon have a date in court.

Krista Davis is the New York Times bestselling author of the Paws & Claws Mysteries, including Murder Most Howl, The Ghost and Mrs. Mewer, and Murder, She Barked, as well as the Domestic Diva Mysteries, including The Diva Steals a Chocolate Kiss and The Diva Wraps It Up. Several of her books have been nominated for the Agatha Award. She lives in the Blue Ridge Mountains of Virginia with a brood of cats and dogs, including a snoopy Jack Russell terrier and a nosy calico cat. Her friends and family complain about being guinea pigs for her recipes, but she notices that they keep coming back for more.

“Davis has created a town that any pet would love—as much as their owners do. And they won’t let a little thing like murder spoil their enjoyment.”—Sheila Connolly, New York Times bestselling author of the County Cork, Museum, and Orchard Mysteries

“Murder, mystery, a bit of romance and seriously PETS!! Who could ask for anything more?”—Open Book Society