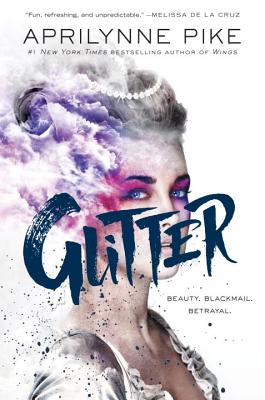 "Raised in corsets and stays, with robots to do everything from cleaning to dressing her, Danica lives in a computer monitored bubble that emulates a court Marie Antoinette herself would have been proud of. Her mother has turned her into a project of social perfection with the singular goal of marrying the king and with her dreams of being a programmer ruined she finds herself swept away in laughter, parties, and politics where behind every smile is a hidden agenda and no kind word is said without calculated measure.

Glitter was an unexpected find for me that I picked up for a fun read but found to be full of very real characters and an engaging plot that pulled me in and didn't let go. You see the main character grow and question herself, learning hard lessons along the way and paying the price for her mistakes. This is a great read with a perfect balance of ball gowns, deadly secrets, the black market, and a dash of romance."

From #1 New York Times bestselling author Aprilynne Pike comes a truly original new novel—Breaking Bad meets Marie Antoinette in a near-future world where the residents of Versailles live like it’s the eighteenth century and an almost-queen turns to drug dealing to save her own life.

Outside the palace of Versailles, it’s modern day. Inside, the people dress, eat, and act like it’s the eighteenth century—with the added bonus of technology to make court life lavish, privileged, and frivolous. The palace has every indulgence, but for one pretty young thing, it’s about to become a very beautiful prison.

When Danica witnesses an act of murder by the young king, her mother makes a cruel power play . . . blackmailing the king into making Dani his queen. When she turns eighteen, Dani will marry the most ruthless and dangerous man of the court. She has six months to escape her terrifying destiny.

Six months to raise enough money to disappear into the real world beyond the palace gates.
Her ticket out? Glitter. A drug so powerful that a tiny pinch mixed into a pot of rouge or lip gloss can make the wearer hopelessly addicted. Addicted to a drug Dani can sell for more money than she ever dreamed.

But in Versailles, secrets are impossible to keep. And the most dangerous secret—falling for a drug dealer outside the palace walls—is one risk she has to take.

Aprilynne Pike is the critically acclaimed, #1 New York Times and internationally bestselling author of the Wings series. She has been spinning stories since she was a child with a hyperactive imagination. She received her BA in creative writing from Lewis-Clark State College in Lewiston, Idaho. She lives in Arizona with her family. Visit her online at aprilynnepike.com and follow her on Twitter at @AprilynnePike.

“The Palace of Versailles gets a darkly twisted, modern day makeover that had me hooked from the heart-pounding opening scene. Glitter is a thoroughly inventive, genre-bending tale that delivers on every level!” --#1 New York Times Bestselling Author, Alyson Noël

"Aprilynne Pike’s gift is that each book she writes is utterly inventive. GLITTER is no exception. As always her characters are interesting, vivid, and dynamic and they play out their nail-biting scenes against a richly-imagined, lush backdrop. Her books are skillfully woven and a royal delight!" --Colleen Houck, New York Times bestselling author of the Tiger's Curse series and Reawakened

"Beautifully detailed scenes serve as the foundation for Danica’s ethical quandaries and illuminate the fantastical world in which she lives." — Publishers Weekly, starred review

"Rich with absorbing detail, clever plotting, and complex characters...readers will thrill to this immersion into a world within a world that feels strangely possible, if not inevitable, in our own future." — Bulletin, starred review