The Most Improbable International Cricket Team Ever: A True Story (Paperback) 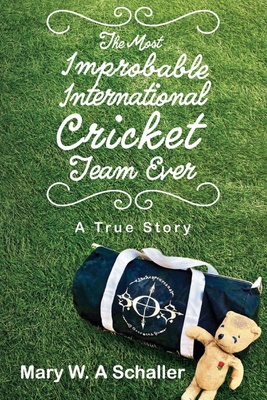 Very few sane adults agree to lead a tour group of twenty-four high school teens on a two-week packaged tour of Great Britain. Even fewer sane adults agree to manage a cricket team made up of teenage actors and show -offs. Only the craziest adult would agree to do both -- which is exactly what a drama teacher named Mary Schaller agreed to do. There were, of course, a few problems -- such as trying to find cricket bats and balls without the help of google or ebay, locating a playing field not near any houses with panes of glass, scouring the libraries for a book -- any book -- on how to play this tradition-bound game, finding a willing coach and most of all, finding a willing co-ed team of English teenagers who might be interested in playing a game of cricket. For drama coach -turned cricket team manager Mary Schaller, the six months between Christmas and the start of the tour in 1988 were akin to Mission Impossible. But it was the kids of Team SOS who kept the dream alive and made it work. Practices in poison ivy-ringed fields amid wax-melting heat did not dismay the kids, no matter how many new obstacles confronted them. And help appeared when it was least expected from a Pakistani cricket club president, a diplomat from the New Zealand Embassy and the night manager of a Mexican restaurant. Even the BBC in far-off England stepped in. Equipment was found and the Marleybone Cricket Club in London sent a book of Cricket Laws. And at the last minute, a British team was located. Now all the SOS needed was a beautiful summer's day in Merrie Olde England to play the game.

Team manager and drama teacher Mary Schaller may be better known to millions of her world-wide readers as Harlequin romance author, Tori Phillips. In telling the story of her students' improbable cricket team, Schaller used her journal from 1988 as well reviewing dozens of photographs from scrapbooks of that trip and from the recollections of several former SOS Team members to weave the story of this hilarious and often heart-warming adventure.

Mary W. Schaller is a native of Washington, DC [remaining staunchly non-partisan for survival]. She earned her Bachelor of Arts degree in Theatre Arts from the University of San Diego, and, prior to her marriage, she worked in the Communications Department of Metro-Goldwyn-Mayer Studios in Culver City, CA. For twenty years, she was a docent at the Folger Shakespeare Library in Washington, DC. During that time, she also directed 21 play productions for Fairfax County [VA] Followspot Children's Theater, including 17 plays of Shakespeare. She is the award-winning author of five plays [Dramatic Publishing Company and Heartland Plays, Inc.], three non-fiction histories [University of South Carolina Press] and ten historical novels, written as Tori Phillips [Harlequin Ltd.] Schaller's novels have been translated into fourteen languages and they have collectively sold three million copies world-wide. Her plays have been performed in the United States, as well as in Canada, Australia and England. Mary lives with her husband Martin, her husband of fifty-five years, in Springfield, VA. Her hobbies include cruising the Caribbean, reading books and racing radio-controlled sailboats.