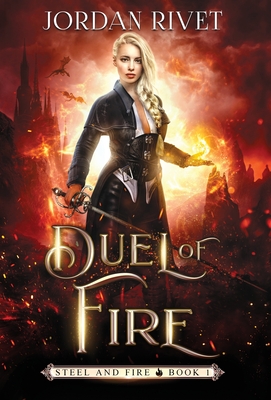 This is book number 1 in the Steel and Fire series.

A champion sword fighter. A handsome prince. A kingdom in peril.

Dara Ruminor is a competitive duelist in Vertigon, where athletes live like kings as long as the crowds love them. She's good with a sword but can't figure out how to charm the spectators like a true champion.

When Dara is asked to train with Prince Siv, the heir to the throne, she faces her most difficult opponent yet. Handsome, charismatic, and utterly infuriating, he refuses to take the sport-or her-seriously.

But someone wants Prince Siv dead, and Dara might be the only one who can protect him. With assassins lurking in the shadows and tensions brewing between the kingdom's magic wielders, Dara and Siv need each other's help with more than just dueling. Skill with a blade might not be enough to save them.

Throne of Glass meets A Knight's Tale in this swashbuckling epic fantasy full of sword fights, assassins, magic, and betrayal.