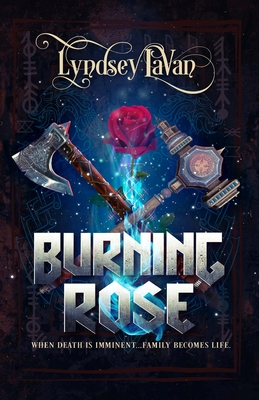 After Phoenix Rose, a seventeen-year-old with a terminal illness, finds her father murdered outside her blazing home, she discovers they had been living a life in hiding...but why?

In the thrilling fantasy debut, a teen discovers that she has otherworldly powers and is the savior-or destroyer-of an ancient Viking race of warriors, and is faced with a decision that can change the world.

Resilient, thorny seventeen-year-old Phoenix Rose has come to terms with her imminent death-she has spent her life finding peace with her terminal illness. But when her father is brutally murdered, and she is sent to live with her two grandmothers in a new town, she finds she has something to live for now more than ever: avenging her father's death and uncovering her family's long-held and mysterious secrets. Burning Rose is the debut book from author Lyndsey LaVan, the first in the captivating The Legacy of Phoenix fantasy series.

At her new high school, Phoenix, "Nix," discovers that each student is more gorgeous than the next . . . including the fierce and otherworldly Alexion Greyson to whom she feels an expected and confusing pull. The typically reclusive Nix finds some solace in her grief and new surroundings by being welcomed into a new group of friends including the perky Sera and a pair of brooding, hulkish, and seductive teenage boys including "Alex" and his friend Cash McCallister. Nix feels almost electric around Alex and it won't be long until she discovers why.

Young adult readers will delight as author Lyndsey LaVan masterfully creates a riveting story blending fantasy and reality. Nix's world begins to unravel and, with the help of her newfound friends, she learns that her past is nothing that she was led to believe and that she is the key to survival for the world as we know it. Her family's secrets harbored Nix's truth . . . one that involves magical powers only she can wield. As she comes to face her own fate-one of being an otherworldly queen and the most powerful Ulfhedinn ever-Phoenix must make a choice that will determine the fate of an ancient Viking race of warriors, her family's powerful ancestors.

"Worlds collide for young adult readers who will love the fast-paced thrills, the chemistry between the characters, and the interplay of fantasy and reality in Burning Rose. Author Lyndsey LaVan expertly weaves a story that is timeless, bringing together elements of loss and longing, coming of age, and survival. Burning Rose: The Legacy of Phoenix Book One is a perfect cross-market read for young adults and adult readers alike, who are searching for the next enduring fantasy classic."