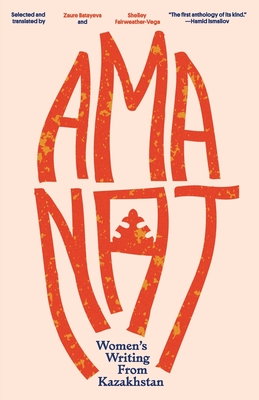 The Millions Most Anticipated, 2022

﻿An unprecedented collection of women's voices from the heart of Central Asia.

From the foreword by Gabriel Mcguire: "I cannot think of anything quite like ... Amanat."

A man is arrested for a single typo, a woman gets on buses at random, and two friends reunite in a changed world.... Diverse in form, scope and style, Amanat brings together the voices of thirteen female Kazakhstani writers, to offer a glimpse into the many lives, stories, and histories of one of the largest countries to emerge from the breakup of the Soviet Union.

The twenty-four stories in Amanat, translated into English from Kazakh and Russian, comprise a groundbreaking survey of women's writing in the Central Asian country over its thirty years of independence, paying homage to the rich but largely unrecorded oral storytelling tradition of the region. Contemplating nostalgia, politics, and intergenerational history in a time altered by modernity, Amanat acutely traces the uncertainties, struggles, joys, and losses of a corner of the post-Soviet world often unseen and overlooked.

Utterly absorbing, Amanat is an invitation to listen-the women of Kazakhstan have stories to tell.