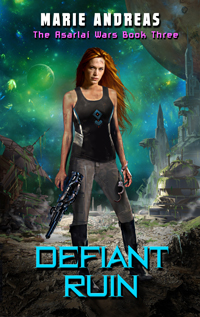 The fight for the Commonwealth comes to an explosive conclusion

The good news is that Captain Vaslisha Tor Dain and most of her rag tag band of mercenaries managed to survive a devastating confrontation with the resurrected ancient enemy the Asarla . The bad news is that the WARRIOR WENCH has crash landed on a deserted planet in an unknown galaxy. Priority number one is getting off this dead rock and hopefully reuniting with the rest of their missing crew. Sadly easier said than done, especially when a supposedly long ago destroyed ship called the DEFIANT shows up.
Vas and the gang can't seem to catch a break, for just as they are starting work on salvaging the DEFIANT, Garmainian bounty hunters suddenly appear to claim a prize on Vas's head.
Now Vas is guilty of a lot of things, but she honestly can't remember the crime she is accused of committing and as far as she knows hasn't ever been to Garmainian space. Disturbingly, this crime apparently occurred during the mysterious missing weeks Vas experienced on her recent "vacation".
Vas and her second in command Deven's to do list keeps getting longer: escape from the Garmainian hunters before they get executed; reunite their small banged up fleet and try to get back into Commonwealth space; find out if their frenemy Marli survived; and of course finally defeat the Asarla for good.
Unfortunately during the six months Vas and company have been stranded, the Asarla have been on the move....which means time and options are rapidly running out

"I'm a fantasy and science fiction novelist exploring worlds near and far. I live in Southern California and find that there are way too many people in my head than can ever be given their own books! I write because I have to just to let some of them out."