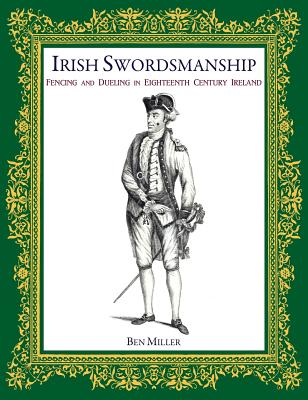 During the eighteenth century, Ireland was Europe's wild west, where the sword was the constant companion of every gentleman, soldier, and rogue. Here, in the dimly lit rooms of Dublin's popular coffee and chocolate houses, among its public parks and cloistered back yards, fearsome duelists such as George Robert "Fighting" Fitzgerald, Alexander "Buck" English, and Captain David "Tyger" Roche fought for life and honor with the sword and pistol. Here, countless swordsmen--colorfully dressed in ruffled silk--stained the ground of St Stephen's Green with blood, and celebrated their survival over glasses of cherry brandy.

This is the story of eighteenth century Ireland's sword culture--of its renowned fencing schools, its famed swordsmen, its female gladiators, and its notorious armed gangs such as the Bucks, Cherokees, and Pinking Dindies, who terrorized the people of Dublin with the small-sword, knife, falchion, and shillelagh, and engaged in vicious battles with members of the city's Night Watch.

Here, also, is the story of Ireland's most celebrated fencing society, the Knights of Tara--whose grand fencing exhibitions won fame and glory for Ireland, whose writings on bayonet fencing found their way into the hands of America's founding father, George Washington, and whose leading member would go on to have a indelible impact upon the history of fencing in the British Isles.

PART TWO of this book contains A Few Mathematical and Critical Remarks on the Sword--an almost completely overlooked fencing treatise, now published again for the first time in more than 230 years, that is currently the only known original treatment of swordsmanship by an Irish author published in Ireland during the eighteenth century. Though anonymously authored, research suggests that this mysterious text--the publication of which directly led to the formation of the Knights of Tara--may be the work of Cornelius Kelly, Ireland's most renowned fencing master. Compiled throughout the 1770s and published in Dublin in 1781, this treatise is by no means a beginner's manual, but is an extensive discussion and elucidation on the technique, form, philosophy, psychology, morality, and strategy of swordsmanship. Although founded upon the French school of small-sword fencing, it exhibits many peculiarities, and the author's method of explaining fencing is unusual for the era. The text contains applications of geometrical and mathematical principles to swordsmanship, how to utilize one's own shadow as a training device, and defenses against assassins and so-called "dirty tricks." In the words of its author,

"Almost every Gentleman who applies himself to the Sword, and] has had a liberal education...consequently will be pleased at an attempt at grafting this art upon the most elevated of the sciences, i.e. the mathematical; and perhaps it may be something novel, to have proved this art, in many instances, to be so closely connected with the common precepts of philosophy."

Irish Swordsmanship contains extensive footnotes, more than sixty drawings, paintings, and engravings from the period, a comprehensive glossary of terms, and seven appendices.