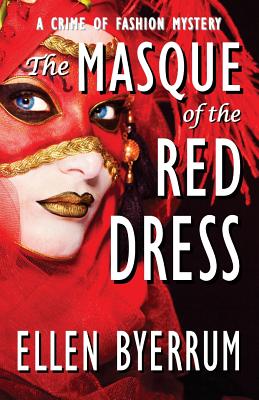 This is book number 11 in the Crime of Fashion Mysteries series.

Behind the Masque of Murder Fashion reporter Lacey Smithsonian has never seen such a gown. The dress is crimson, flowing, fabulous, and infamous. The actress who first wore it on stage died on closing night--playing Death in The Masque of the Red Death at a Russian emigre theatre. Is the notorious red dress cursed with bad luck? Or is the truth even stranger? It's up to Lacey and her so-called ExtraFashionary Perception to find out once and for all. If the Red Dress of Death doesn't get her first. Assaults, burglary and murder follow this stunning gown wherever it goes. But who would want it enough to kill for it? Crazy theatre people? Costume collectors? Or even Russian spies? In Washington, D.C., Lacey discovers, spycraft and stagecraft seem to have much in common. Shadows and deceptions lead her and the Red Dress into a macabre dance with an assassin--and a masquerade with death.

ELLEN BYERRUM is a novelist, a playwright, a reporter, a former Washington, D.C., journalist, and a graduate of private investigator school in Virginia. Her Crime of Fashion mystery series features a savvy, stylish female sleuth named Lacey Smithsonian. Lacey is a reluctant fashion reporter in Washington D.C., which she lovingly refers to as "The City Fashion Forgot." Two Crime of Fashion novels, Killer Hair and Hostile Makeover, have been filmed. The Woman in the Dollhouse is Byerrum's first suspense thriller. She anticipates exploring Tennyson's continuing odyssey in a sequel. Byerrum has also penned a middle-grade mystery, The Children Didn't See Anything, the first in a projected series starring the precocious twelve-year-old Bresette twins. Her plays, A Christmas Cactus and Gumshoe Rendezvous, are published by Samuel French Inc. and written under the pen name Eliot Byerrum. Follow Ellen Byerrum on Facebook and Twitter and on her website at ellenbyerrum.com. Her books are available through booksellers and Amazon. Her YouTube Channel was inspired by her readers' interest in the "Fashion Bites" penned by her Crime of Fashion protagonist, Lacey Smithsonian. These short YouTube videos offer Byerrum's practical fashion advice and humorous style commentary: https: //www.youtube.com/channel/UCvnouFJdA-CTxwzY25gsncA