Ark of the Gods: A Sean Livingstone Adventure: Book 2 (Paperback) 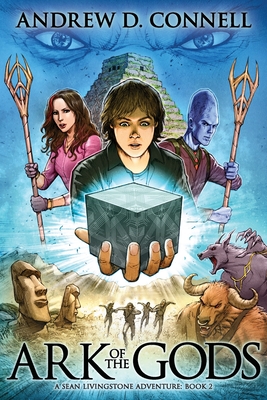 An alien invasion... Predicted thousands of years ago... Leaves the world devastated... Three unlikely teenagers must unite to save humanity.

After 10,000 years, the ancient alien race called the Isharkute have returned to Earth, obliterating our military forces, intent on enslaving humanity. Only one thing can stop them: the legendary Ark of the Covenant - an alien device of incredible power.

Three cryptic riddles to the Ark have been hidden across the world beneath ancient ruins, clues only Sean and his Isharkute friend Nocao can decipher. With new companions, sixteen-year-old Bella and her brother Arturo forced to join them, their quest takes them to treacherous, far-off locations while unravelling some of the greatest mysteries of all time.

But Overseer Senetep is close behind, hunting them at every turn. His Isharkute invasion has brought widespread death, destruction, and a terrifying new army of hybrids.

With the world's governments and civilizations in ruins, it's a race against time to find the Ark before Senetep. Can Sean unite humanity and save the world?

Ark of the Gods is perfect for fans of young adult science-fiction and action-adventure. It's a pulse-pounding race across the world, traversing the mysterious and windswept Easter Island, the searing Sahara Desert, the oppressive jungles of Central America and down into the depths of the deepest oceans. The story weaves Egyptian, Greek and Mayan mythologies with themes of courage, friendship and coming of age within a framework of classic myths and legends.