The Weight of Things (Paperback) 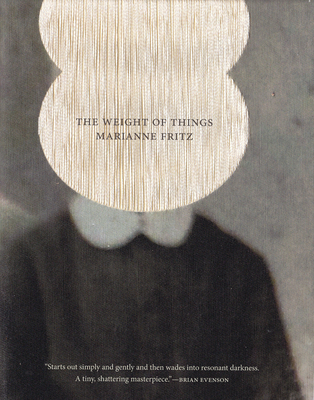 “A harrowing book about the horrors of motherhood, jealousy, and war trauma.” —Kirkus Reviews

The Weight of Things is the first book, and the first translated book, and possibly the only translatable book by Austrian writer Marianne Fritz (1948–2007). For after winning acclaim with this novel—awarded the Robert Walser Prize in 1978—she embarked on a 10,000-page literary project called “The Fortress,” creating over her lifetime elaborate colorful diagrams and typescripts so complicated that her publisher had to print them straight from her original documents. A project as brilliant as it is ambitious and as bizarre as it is brilliant, it earned her cult status, comparisons to James Joyce no less than Henry Darger, and admirers including Elfriede Jelinek and W. G. Sebald.

Yet in this, her first novel, we discover not an eccentric fluke of literary nature but rather a brilliant and masterful satirist, philosophically minded yet raging with anger and wit, who under the guise of a domestic horror story manages to expose the hypocrisy and deep abiding cruelties running parallel, over time, through the society and the individual minds of a century.

Marianne Fritz (1948–2007) was an Austrian novelist. Her first book, The Weight of Things, marked the beginning of an ambitious cycle of novels with the overarching title of Festung, or "The Fortress," comprising Das Kind der Gewalt und die Sterne der Romani, Dessen Sprache du nicht verstehst, and the gargantuan Naturgemäß, the third volume of which she was preparing at the time of her death.

Adrian Nathan West is a writer and literary translator living in Spain. His criticism has appeared in the London Review of Books, the Times Literary Supplement, and many other publications. He has translated books from German, Catalan, and Spanish, including Jean Améry's Charles Bovary, Country Doctor, which is published by NYRB Classics, and Pere Gimferrer for NYRB Poets. His debut novel, My Father’s Diet, was published in early 2022.

“Written in a brisk tone that disguises its destination, this slow-burning horror story steps quietly and methodically into a heart of familial darkness. . . . The war haunts this novel, adding to the weight of everyday things and everyday evils that Fritz so ingeniously dissects.” —The New York Times Book Review

“Fritz won the Kafka Prize in 2001 and her work, like his, is both deeply upsetting and profound. Her translator writes in his ‘Afterword’ that ‘there is a class of artists whose work is so strange and extraordinary that it eschews all gradations of the good and the mediocre: genius and madness are the only descriptors adequate to its scale,’ and he situates Fritz quite forcefully in this class. He seems to be correct.” —Chicago Tribune

“The Weight of Things is a tightly wrought masterwork of narrative, a little gem that shows off everything that it can (and should) do, without looking as if it were particularly trying.” —Los Angeles Review of Books

“[A] stylized book with numerous horrors at its core, both national and personal.” —Electric Literature

“If the presentation, shifting back and forth across the years and events, seems at first confusing it ultimately works very well, and what seems like a low-intensity narrative comes to pack a devastating punch.” —The Complete Review

“Fritz’s poetic auscultation of this weight, this madness, is absolutely astounding, both in its scope and its subtlety. It is difficult to summarize her methods, as they are woven so seamlessly into the narrative: its pacing, its movement through time, coalescing into a sensory experience. She describes a palpable environment of disorientation and loss, set against a tapestry of gray skies, war-ruined structures, and dark woods into which people disappear.” —Entropy