Death of a Secret: A Barbara O'Grady Mystery (Paperback) 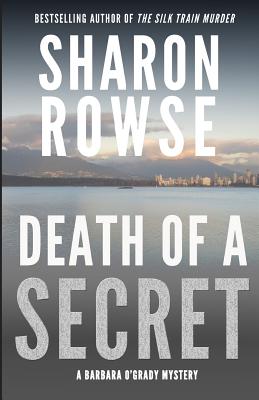 Sharon Rowse is a Vancouver-based writer who has always loved reading, in every genre and every format. In the absence of a good book she's been known to read the back of the cereal boxes. Fulfilling a lifelong dream, Sharon is now writing two mystery series. DEATH OF A SECRET is the first book in the "Barbara O'Grady Series." These are urban private eye novels, based in Vancouver and seen through the eyes of failed artist turned investigator Barbara O'Grady. Her debut novel, THE SILK TRAIN MURDER is the first book in the "Klondike Era Mystery" historical mystery series. The book received starred reviews in Booklist and Quill & Quire and was nominated for an Arthur Ellis award for Best First Novel. The series continues as John Lansdowne Granville finds his calling as a private investigator. For more information about Sharon's work, visit her website at www.sharonrowse.com ..".an impressive debut...lots of colorful historical detail..."-Booklist (starred review) "Rowse knows her characters-how they think, how they act and interact...It's just another of the many unexpected pleasures that make Rowse one of Canada's newest mystery writers to watch.."-Quill & Quire (starred review) "Talk about a big, bubbling stewpot of a book!... Rowse has delivered a wild ride through a colorful, relatively unknown period in North American history, and she's populated it with a host of unforgettable characters. The Honorable Granville, makes an appealing leading man, and his lady love, the liberated Emily Turner, provides the perfect romantic coda to this rip-roaring adventure." -Mystery Scene Magazine