Introduction to Magic: Rituals and Practical Techniques for the Magus (Paperback) 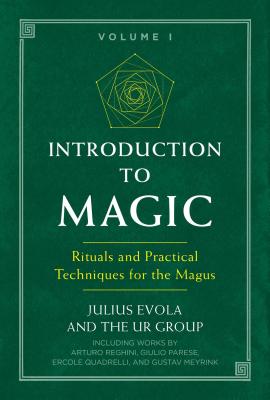 The rites, practices, and texts collected by the mysterious UR group for the use of aspiring mages.

• Rare Hermetic texts published in English for the first time.

In 1927 Julius Evola and other leading Italian intellectuals formed the mysterious UR group. Their goal: to bring their individual egos into a state of superhuman power and awareness in which they could act "magically" on the world. Their methods: the practice of ancient Tantric and Buddhist rituals and the study of rare Hermetic texts. So successful were they that rumors spread throughout Italy of the group's power, and Mussolini himself became quite fearful of them. Now for the first time in English Introduction to Magic collects the rites, practices, and knowledge of the UR group for the use of aspiring mages.

Included in Introduction to Magic are instructions for creating an etheric double, speaking words of power, using fragrances, interacting with entities, and creating a "magical chain." Among the arcane texts translated are the Tibetan teachings of the Thunderbolt Diamond Path, the Mithraic mystery cult's "Grand Papyrus of Paris," and the Greco-Egyptian magical text De Mysteriis. Anyone who has exhausted the possibilities of the mundane world and is ready to take the steps necessary to purify the soul in the light of knowledge and the fire of dedication will find a number of expert mentors here.

A controversial philosopher and critic of modern Western civilization, Julius Evola (1898-1974) wrote widely on Eastern religions, alchemy, sexuality, politics, and mythology. Inner Traditions has published his Eros and the Mysteries of Love: The Metaphysics of Sex, The Yoga of Power, The Hermetic Tradition, Revolt Against the Modern World, The Mystery of the Grail and Ride The Tiger.

"Evola . . . had a clarity of mind and a gift for explaining tremendously difficult concepts in nonacademic language. . . . His descriptions of subtle states and the practices that lead to them are as lucid as these difficult subjects allow."
— Gnosis

"The essays of the UR Group constitute the most complete and the highest magical teaching ever set before the public. . . . The ultimate goal is the identification of the individual with the Absolute. This is a powerful and disturbing book, and a classic. One can be quite certain that it will still have readers centuries from now."
— Joscelyn Godwin, author of Harmonies of Heaven and Earth

"This collection of essays . . . cover the practical, the theoretical and the unclassifiable, such as the Mithraic Ritual of the Great Magical Papyrus of Paris, the only ritual from the Ancient Mysteries to have survived intact."
— The Watkins Review, Winter 2001/02

"Introduction to Magic is a collection of intelligent and erudite essays (many of them admirably concise)."
— Hagal, May 2001

". . . should be standard reading for any serious academic or practical student of occultism. . . . Experienced occultists will welcome it as a breath of fresh air and a journey into little discussed territories."
— Mark Stavish, The Institute for Hermetic Studies, Mar 2006

"A landmark publication for the new age, delineating clearly between mysticism and magic, written in a Germanic style that allows for unhurried, penetrating insights. . . . You don't read this book, you experience it. . . . A mighty book, like a torrent, that sweeps paltry modern ideas away."
— The Book Reader, Spring/Summer 2002

"This new work in hand is unlike any other book on magic previously published."
— New Dawn, September-October 2001