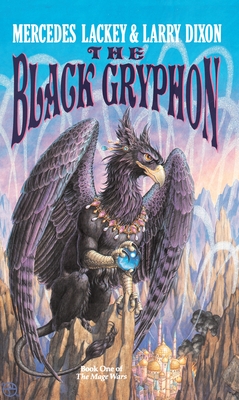 This is book number 1 in the Mage Wars series.

It is an age when Valdemar is yet unfounded, its organization of Heralds yet unformed, and magic is still a wild and uncontrolled force.

Skandranon Rashkae is perhaps the finest specimen of his race, with gleaming ebony feathers, majestic wingspan, keen magesight and sharp intelligence. Courageous, bold, and crafty, Skan is everything a gryphon should be. He is the fulfillment of everything that the Mage of Silence, the human sorcerer called Urtho, intended to achieve when he created these magical beings to be his champions, the defenders of his realm--a verdant plain long coveted by the evil mage Maar.

Now Maar is once again advancing on Urtho's Keep, this time with a huge force spearheaded by magical constructs of his own--cruel birds of prey ready to perform any evil their creator may demand of them. And when one of Urtho's Seers wakes from a horrifying vision in which she sees a devastating magical weapon being placed in the hands of Maar's common soldiers, Skandrannon is sent to spy across enemy lines, cloaked in the protective of Urtho's powerful Spell of Silence.

Mercedes Lackey is a full-time writer and has published numerous novels and works of short fiction, including the best-selling Heralds Of Valdemar series. She is also a professional lyricist and a licensed wild bird rehabilitator. She lives in Oklahoma with her husband, artist Larry Dixon, and their flock of parrots.