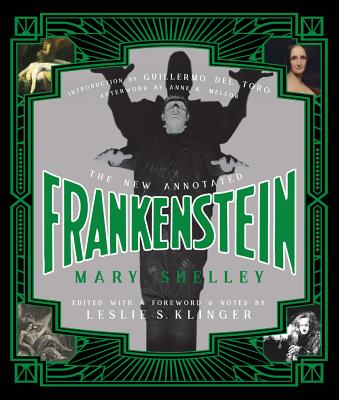 Two centuries after its original publication, Mary Shelley’s classic tale of gothic horror comes to vivid life in "what may very well be the best presentation of the novel" to date (Guillermo del Toro).

"Remarkably, a nineteen-year-old, writing her first novel, penned a tale that combines tragedy, morality, social commentary, and a thoughtful examination of the very nature of knowledge," writes best-selling author Leslie S. Klinger in his foreword to The New Annotated Frankenstein. Despite its undeniable status as one of the most influential works of fiction ever written, Mary Shelley’s novel is often reductively dismissed as the wellspring for tacky monster films or as a cautionary tale about experimental science gone haywire. Now, two centuries after the first publication of Frankenstein, Klinger revives Shelley’s gothic masterpiece by reproducing her original text with the most lavishly illustrated and comprehensively annotated edition to date.

Featuring over 200 illustrations and nearly 1,000 annotations, this sumptuous volume recaptures Shelley’s early nineteenth-century world with historical precision and imaginative breadth, tracing the social and political roots of the author’s revolutionary brand of Romanticism. Braiding together decades of scholarship with his own keen insights, Klinger recounts Frankenstein’s indelible contributions to the realms of science fiction, feminist theory, and modern intellectual history—not to mention film history and popular culture. The result of Klinger’s exhaustive research is a multifaceted portrait of one of Western literature’s most divinely gifted prodigies, a young novelist who defied her era’s restrictions on female ambitions by independently supporting herself and her children as a writer and editor.

Born in a world of men in the midst of a political and an emerging industrial revolution, Shelley crafted a horror story that, beyond its incisive commentary on her own milieu, is widely recognized as the first work of science fiction. The daughter of a pioneering feminist and an Enlightenment philosopher, Shelley lived and wrote at the center of British Romanticism, the “exuberant, young movement” that rebelled against tradition and reason and "with a rebellious scream gave birth to a world of gods and monsters" (del Toro).

Following his best-selling The New Annotated H. P. Lovecraft and The New Annotated Sherlock Holmes, Klinger not only considers Shelley’s original 1818 text but, for the first time in any annotated volume, traces the effects of her significant revisions in the 1823 and 1831 editions. With an afterword by renowned literary scholar Anne K. Mellor, The New Annotated Frankenstein celebrates the prescient genius and undying legacy of the world’s "first truly modern myth."

Guillermo del Toro is a director, screenwriter, producer, and novelist.

Anne K. Mellor is a professor of English and women’s studies at UCLA.

A cornucopia of background information. . . . Teachers will be delighted to have this material in one volume. Students will find the notes illuminating. General readers will be fascinated to uncover the many layers behind the writing of Shelley’s novel. . . . Klinger’s edition allows readers to understand the complexities of the novel as well as the difficulties endured by its author. Only then can one be truly inspired by Mary Shelley’s genius and her bravery.
— Charlotte Gordon

A gorgeous, compelling, and simply fascinating volume just in time for the 200th anniversary of its source material’s publication. Klinger does not presume to add to the comprehensive body of scholarship on Shelley’s novel; he wants to illuminate the original text itself and showcase how complex and engaging it was—and still is. . . .The resulting volume will find a huge audience in libraries, from amateur scholars to students to genre fans. Klinger has not only given us a useful reference work but he has also reminded us all just how fun Frankenstein still is to just read.

In annotating Mary Shelley's Frankenstein, Les Klinger has pulled off the nearly impossible trick of making the original novel as interesting as the phenomena (from the many incarnations of the monster to the field of science fiction) which it spawned. A beautifully illustrated compendium of Frankensteinian facts and information.

With the mind of a mad scientist and the heart of a voluptuary, Leslie S. Klinger has been striding through Sherlock Holmes and masterpieces of Fantastica for years now, illuminating, enlightening, clarifying, and amusing as he went. On the subject of Mary Shelley and Frankenstein, Klinger surrounds and supports the famous novel with a thousand touches of scholarship and wit. He has done us all an immense service.

What a marvelous book! Klinger's deep research and knowledge of his subject shines through this entertaining and fascinating insight into Mary Shelley, her life and times, and the themes and vast impact of her earth-shaking novel Frankenstein; or, The Modern Prometheus.

A stunning one-stop emporium of all things Frankenstein, a standout volume even in the limitless sea of editions of this book.
— Steve Donoghue