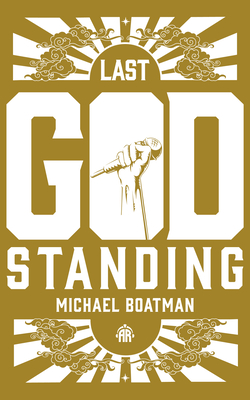 In a world without faith, only one deity can be... But what's the point of being immortal if you can't take a joke?

When God retires to join the human race, an army of desperate deities declares war over Earth's vanishing supply of mortal faith. Now, uncomfortably occupying the body and soul of struggling comedian, Lando Cooper, He finds Himself the target of an unholy uprising.

Forced to defend Himself and His mortal friends and family from a mob of hungry gods, Lando must also discover who is killing his divine colleagues and stealing their dwindling powers. Could it be Lucifer, who went missing soon after his own Hellish retirement?

Lando, A.K.A. He Who Once Spoke From A Burning Bush, must put down an insurrection, land a lucrative TV deal and propose to the girl of his dreams. But he's all too mortal; a shadow of his former Self, possessing a mere fraction of God's former powers. Meanwhile, there's a godeater on the loose too. With the death of every victim it grows stronger. And it's coming for Lando's immortal soul.File Under: Fantasy [ Gods Behaving Badly | Power Struggle | The Way He Tells ’Em | Simply Devine ]