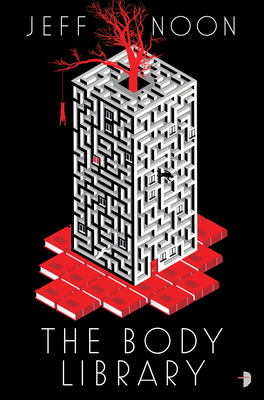 This is book number 2 in the Nyquist Mysteries series.

In the fiction that is Jeff Noon’s The Body Library, there is a non-fictional world where stories are important to life. So important, they are treated with a religious reverence, mirrored by a strict economic control; only “proper” stories allowed. But, in this place where stories are made, ended, and intertwined, there are still those that escape the realm of sanity. The Body Library is one of them. I found myself entranced by the novel’s almost poetic lines, as if I were succumbing to a spell made by the words on the page. The novel also becomes a fever dream of stories and words that winds through the realms of fiction and non-fiction, playing on the idea of when one can become the other. It was as if I was watching an episode of Twin Peaks. Even if you haven't read the previous novel, A Man of Shadows, it is not needed to enjoy this story. Mysterious, intriguing, and hypnotic, The Body Library is a visit into the weird side of literature.

Jeff Noon returns with a staggering hallucinogenic sequel to A Man of Shadows, taking hapless investigator John Nyquist into a city where reality is contaminated by the imagination of its citizens

In a city dissolving into an infected sprawl of ideas, where words come to life and reality is contaminated by stories, John Nyquist wakes up in a room with a dead body… The dead man’s impossible whispers plunge him into a murder investigation like no other. Clues point him deeper into an unfolding story infesting its participants as reality blurs between place and genre.

Only one man can hope to put it all back together into some kind of order, enough that lives can be saved… That man is Nyquist, and he is lost.

Jeff Noon is an award-winning British novelist, short story writer and playwright. He won the Arthur C Clarke Award for Vurt, the John W Campbell award for Best New Writer, a Tinniswood Award for innovation in radio drama and the Mobil prize for playwriting. He was trained in the visual arts, and was musically active on the punk scene before starting to write plays for the theatre. His work spans SF and fantasy genres, exploring the ever-changing borderzone between genre fiction and the avant-garde.

“By writing a novel set in literature itself the author has created a new psychedelic meta-genre as well as a fantastic story that sticks in the mind long after the novel itself is read.”
– British Fantasy Society

“There is a fluidness to Noon's writing that initially made me think The Body Library would be like Ishiguro's dream-like The Unconsoled. As I read further, however, I felt more like I was in the atmosphere of 1408 by Stephen King or the movie Dark City – the noir settings and slip-away realities where what's around the corner can't be articulated and yet ... Things change and reality is different but the writing is well-structured so it's easy to follow. The writing is as much of a treat as the setting and the story and the characters.”
– Ephemeral Digest

“Lordy, this was one HELL of a trip. Not for the faint of heart. Or the impatient. But by Bradbury in heaven, I swear this is the spiritual godson of The Illustrated Man on PCP. Noon’s imagination is TOP NOTCH. I think I’ve just found my new favorite to-go guy for cutting edge and brilliant Weird fiction.”
– Brad K Horner

“The Body Library is a brilliant piece of writing that does a satisfying job of merging noir, magical realism, and a love of all things literary.”
– SF Revu

“An ingeniously manufactured art object, directing the reader’s attention with a concatenation of smoky-eyed dreamlike imagery punctured by the Pavlovian responses of its actors – like a film noir mystery directed by Luis Buñuel and edited by Lev Kuleshov.”
– The 1000 Year Plan

“Underneath the beautiful madness The Body Library is wittily observant, creepy and disconcerting, occasionally humorous, always on message even as it goes off on tangents and is a wonderfully hypnotic and completely mesmerizing story. I loved every single insane moment of it, just riveting. Completely riveting.”
– Liz Loves Books

Praise for A Man of Shadows

“This superb novel of light, glass and blood proves again that Jeff Noon is one of our few true visionaries.”
– Warren Ellis

“A disturbing and bizarre journey by one of the great masters of weird fiction.”
– Adrian Tchaikovsky, Arthur C Clarke Award-winning author of Children of Time

“Manchester’s delirious prophet returns with scripture written in shadow and light.”
– Kieron Gillen, co-creator of The Wicked + The Divine