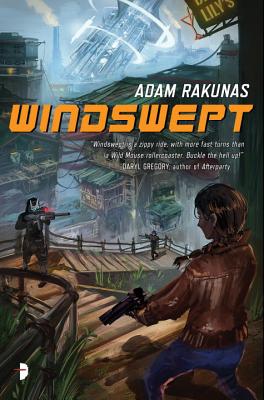 This is book number 1 in the Windswept series.

Labor organizer Padma Mehta is on the edge of space and the edge of burnout. All she wants is to buy out a little rum distillery and retire, but she's supposed to recruit 500 people to the Union before she can. She's only thirty-three short. So when a small-time con artist tells her about forty people ready to tumble down the space elevator to break free from her old bosses, she checks it out — against her better judgment. It turns out, of course, it was all lies.

As Padma should know by now, there are no easy shortcuts on her planet. And suddenly retirement seems farther away than ever: she's just stumbled into a secret corporate mission to stop a plant disease that could wipe out all the industrial sugarcane in Occupied Space. If she ever wants to have another drink of her favorite rum, she's going to have to fight her way through the city's warehouses, sewage plants, and up the elevator itself to stop this new plague.

Adam Rakunas has worked a variety of weird jobs. He’s been a virtual world developer, a parking lot attendant, a triathlon race director, a fast food cashier, and an online marketing consultant.

Now a stay-at-home dad, Adam splits his non-parenting time between writing, playing the cello, and political rabble-rousing. His stories have appeared in Futurismic and the Magazine of Fantasy and Science Fiction. Windswept is his first novel.

"Windswept is a classic noir story shot full of space-rum and rocketed into the future. It’s not anything so simple as a thriller with a layer of chrome and some plastic ray guns tacked on; this isn’t a Chandler pastiche in nerd-drag. The future tech is integral to the story, and Rakunas clearly enjoys building out a science fiction world."
– Paul Constant, The Seattle Review of Books

“Adam Rakunas is one funny SOB, and now everyone’s going to know it. Windswept is a zippy, zany ride, with more fast turns than a Wild Mouse rollercoaster. There’s more witty banter and laughs per page than anything I’ve read in years, making this, my friends, the rarest kind of science-fiction-comedy novel: one that’s actually funny. Buckle the hell up.”
– Daryl Gregory, Award-winning author of Afterparty and We Are All Completely Fine

“Seriously, this book is just plain funny. Even so, it manages to present an interesting perspective on politics, consumerism, and unionizations. So if you want to read about Co-Ops, giant crab attacks, sewer chases, and the inadvisability of copying techniques from the movies,Windswept is definitely worth a look.” 4/5 stars.
– Bookaneer

“Windswept is a fast-paced action thriller that delivers multiple twists and turns and an unrelenting pace. Padma is a tough, no-nonsense heroine, among a cast of interesting and diverse women (which is, sadly, still rare enough to be delightful). It’s a perfect rum-fuelled thrill ride.”
– Astounding Yarns

“It’s very rare for a book to grab my attention on the first page, then proceeds to drag me through a fast-paced, action packed SF romp. The book is irreverent and zany and I heartily recommend picking it up.”
– Ted Mahsun

“Windswept fuses edge of your seat action with thought provoking speculation – a perfect blend for an unforgettable science fiction read.”
– The Mutt Cafe