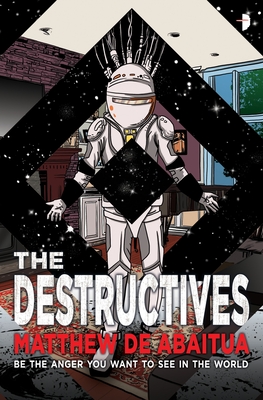 This is book number 3 in the The Seizure Trilogy series.

Theodore Drown is a destructive. A recovering addict to weirdcore, he’s keeping his head down lecturing at the university of the Moon. Twenty years after the appearance of the first artificial intelligence, and humanity is stuck. The AIs or, as they preferred to be called, emergences have left Earth and reside beyond the orbit of Mercury in a Stapledon Sphere known as the university of the sun. The emergences were our future but they chose exile. All except one. Dr Easy remains, researching a single human life from beginning to end. Theodore’s life.

One day, Theodore is approached by freelance executive Patricia to investigate an archive of data retrieved from just before the appearance of the first emergence. The secret living in that archive will take him on an adventure through a stunted future of asylum malls, corporate bloodrooms and a secret off-world colony where Theodore must choose between creating a new future for humanity or staying true to his nature, and destroying it.

Matthew De Abaitua’s novel The Red Men was shortlisted for the Arthur C Clarke Award and adapted into a short film ‘Dr Easy’ by Shynola and produced by Film4/Warp Films. His science fiction novels IF THEN (Angry Robot, September 2015) and The Destructives (Angry Robot, 2016) complete the loose trilogy begun with The Red Men. His book Self & I: A Memoir of Literary Ambition (Eye Books, 2018) was widely reviewed in the national press, chosen as a Financial Times Summer Read and described by The Times Literary Supplement as "a compelling reminiscence". He teaches creative writing and science fiction at the University of Essex and lives in Hackney.

“It’s a work that doesn’t so much subvert expectations as shatter them utterly. It’s dense, but it also moves; it’s both a breakneck thriller and one of the year’s most thoughtful works of science fiction.”
– B&N Sci-Fi & Fantasy Blog

“Matthew De Abaitua has the knack of delivering the most complex of concepts and diabolical leaps of imagination in a way that first entices then completely draws the reader in. A thrilling book.”
– Strange Alliances

“A marvellously written book, whose invention and surprises gain momentum until its boggler of an ending.”
– SFX Magazine

“The story is set against a detailed background that blends creative imagination with intelligent prediction to arrive at a credible future. From designer drugs to shopping malls that double as asylums, from obsessive data tracking to floating offshore habitats for the wealthy, the future depicted here is a credible offshoot of current trends.”
– Tzer Island

“A distinctive and grand work of the imagination. You don’t need a VR headset to appreciate this work of art, just eyes and a brain.”
– The Generalist

“The Destructives is as successful as its predecessor and together they make one of the most intriguing and disturbing near-future speculations published for some years.”
– Strange Horizons

“The Destructives is well written and of superior construction, and the ideas De Abaitua grapples with in this novel – the nature of artificial intelligence, the endgame of global capitalism, the eternal mismatch between material prosperity and emotional fulfilment – are compelling and attention-worthy. That De Abaitua navigates the often abstruse territory of his particular science fiction without once sacrificing the predominantly literary values of formal coherence or linguistic suppleness is yet more testament to his skill, not just as a writer but as a thinker.”
– Nina Allan, for The Anglia Ruskin Centre for Science Fiction and Fantasy