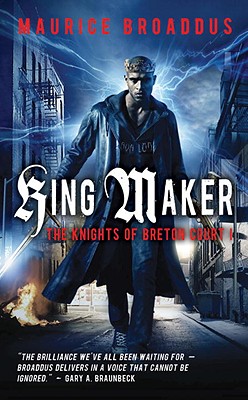 By Maurice Broaddus
Unavailable to Order
Hard to Find

This is book number 1 in the Knights of Breton Court series.

Maurice Broaddus graduated in 1993 from Indiana University-Purdue University at Indianapolis and holds a Bachelor's of Science degree in Biology. He works as an environmental toxicologist for a local firm, Commonwealth Biomonitoring. He comes from a family that includes several practicing obeah (think: Jamaican voodoo) people, but is now the facilitator for the church, The Dwelling Place. He is married with two children.

"There are fewer greater pleasures in a reader's life than witnessing a writer whose work they have enjoyed reached a new plateau in their storytelling skills, and such is the case here... Broaddus delivers in a voice that both whispers and roars and cannot be ignored." - Bram Stoker and International Horror Guild Award-winner Gary A. Braunbeck

"Maurice Broaddus' writing creates a dangerous and authentic mood. The language is fierce and evokes the gritty realism of life on the streets... For some, King Maker is going to be the best read of 2010." - FantasyLiterature.com

"King Maker is a fascinating novel... [and] should be on every SF fan's shelf." - Adam Christopher

"King Maker's strength is its ability to stay true-to-life even when the fantasy components come into play..." - Nick Cato, Stem Shots

"It’s impossible to approach a new version of the timeless tale [of King Arthur] without asking, 'Do we really need this version?' I’m pleased to report that Maurice Broaddus provides many compelling answers to this question, answers which led me to conclude with a resounding 'yes.'" - The Sci-Fi Guys Book Review