The Adversaries: The Return of Ravana Book 2 (Paperback) 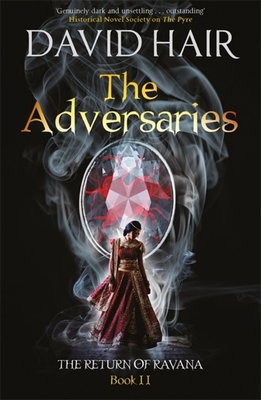 From the floodlit TV studios of Mumbai to the glittering Rajput courts, Vikram, Amanjit, Deepika and Ras must battle the sorcerer-king Ravindra: his power is growing, and so is his evil reach . . .

The second in award-winning author David Hair's series The Return of Ravana.

Mumbai, 2010: Everyone's talking about Swayamvara Live!, the TV reality show recreating the ages-old custom where young men compete for the hand of a noble bride. In this case, the bride is Bollywood stunner Sunita Ashoka, who is pledged to marry the man who wins the on-screen contest. For Vikram Khandavani, it's a chance to draw out his nemesis Ravindra, the reincarnated sorcerer-king - but he's taking a deadly gamble.

Delhi, 1175: King Prithviraj Chauhan is about to storm the swayamvara of the beautiful Sanyogita - but he's not the only one fixated on the bride-to-be: Ravindra-Raj is coming too, and he's riding at the side of a fierce invader. Only Chand Bardai, in another life known as Aram Dhoop, the Poet of Mandore, stands between Ravindra and all the thrones of India.

David Hair is an award-winning writer of fantasy for adult and YA readers. He was born in New Zealand and travelled widely, and after spending time in Britain, then India, he now lives in Auckland, New Zealand, with his wife. His epic fantasy sagas The Moontide Quartet and The Sunsurge Quartet, and his YA series The Return of Ravana, are published by Jo Fletcher Books.

Extremely interesting and riveting . . . will keep you hooked to the very end. Hair has managed to pack horror, reincarnation, mythology, ritual of Sati and history all in one book!—thebookloversreview.blogspot.com on The Pyre

Riveting! Like its reincarnated heroes, I was drawn again and again to David Hair's gripping, blood-soaked tale—Chris Bradford, author of Young Samurai on The Pyre

When it comes to Young Adult fiction, David Hair hasn't just broken the mould. He's completely shattered it . . .The Pyre is a great opportunity to experience a story featuring diverse locations and characters, not to mention a wonderful read all around—Mogsy (Bibliosanctum) on GoodReads

The Pyre was genuinely dark and unsettling . . . The story-telling within the novel is outstanding,—Historical Novel Society on The Pyre

A fantastically written tale . . . An amazing story set in a magnificent background, it had me hooked from the very first page. The last half of the book literally had me on the edge of my chair, rooting for the characters in both timelines and wondering how the history would unfold and if it would repeat itself—Draumr Kopa

A good, gripping read—Blog in Basket

David Hair did an amazing job at recreating the Ravana legend . . . great tension and character development . . . This was a fantastically written novel which will appeal to readers outside the fantasy genre too. A 5 star read!'—Old Victorian Quill on The Pyre

Having broken down myths and folklores to form stories for young minds, the reincarnation of Ravana and others from ancient Indian history, along with the sacrificial edge to the thriller series has pushed the author into the list of must-reads for young adults—Telegraph, India

I enjoyed the characters . . . [I] was sorry to say goodbye to the cast—It Puts the Blog in the Basket

If you like fantasy influenced by mythology and would like to explore beyond the well-known Western mythologies, The Pyre is an excellent departure point—Fantastical Librarian on The Pyre