The Children of the Sky (Zones of Thought #3) (Paperback) 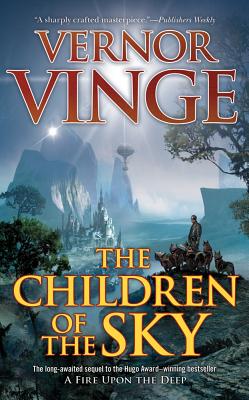 By Vernor Vinge
Unavailable to Order
Out of Print

This is book number 3 in the Zones of Thought series.

The Children of the Sky is the long-awaited (direct) sequel to the
awesome Hugo Award-winning A Fire Upon the Deep. (A Deepness in the Sky
was a prequel.) Galactic Zones of Thought … where you are in the
universe determines how high you can evolve, from the Slow Zone (where
we and the Tines are) to the Transcend (where the Powers reign) ... a
concept that has garnered Vinge multiple Hugos.

It’s been a few years since the Battle of Starship Hill and the titular
children are growing up. A few are even starting to doubt the reasons
behind their fall from grace, and the players involved in that fall.
Most remember their old lives in the Top of the Beyond and long to
return to their rightful place in the universe … teen angst to the
hundredth power. It’s not easy in the Slow Zone, but you make do. Who
knows, maybe they can raise themselves out of their medieval existence
and return to the stars? Humankind has done it before. It will do it
again.

For now, most Humans and Tines live in relative harmony, each race
striving to better itself with the help of the other … some want to leap
into space, and some want to prepare. Despite speculation to the
contrary, Ravna knows the Blight is still on the way. It was not
totally destroyed when Pham Nuwen dimmed the sun, after all, just
slowed down. It might take thousands of years … or hundreds … or only a
few … but it is coming.

Vinge again proves that his multiple Hugo Award wins were no fluke.
Galactic concepts brought to a very human level. Whether it’s an actual
human or a to-us-alien is immaterial. (The man could make you weep for
a potted plant, or the mere ‘limb’ of an alien being.) My only
criticism is that I might have to wait a few years for the next
installment. But like the Blight, I know it’s coming and I have time to
prepare. Moreover, I will rest in the certain knowledge that when the
next installment arrives, it will be awesome. Thank the Powers.

After nearly twenty years, Vernor Vinge has produced an enthralling sequel to his memorable bestselling novel A Fire Upon the Deep.

In Children of the Sky, ten years have passed on Tines World, where Ravna Bergnsdot and a number of human Children ended up after a disaster that nearly obliterated humankind throughout the galaxy. Ravna and the pack animals for which the planet is named have survived a war, and Ravna has saved more than one hundred Children who were in cold-sleep aboard the vessel that brought them.

While there is peace among the Tines, there are those among them—and among the humans—who seek power…and no matter the cost, these malcontents are determined to overturn the fledgling civilization that has taken root since the humans landed.

On a world of fascinating wonders and terrifying dangers, Vernor Vinge has created a powerful novel of adventure and discovery that will entrance the many readers of A Fire Upon the Deep. Filled with the inventiveness, excitement, and human drama that have become hallmarks of his work, Children of the Sky is sure to become another great milestone in Vinge's already stellar career.
One of Library Journal's Best SF/Fantasy Books of 2011.

Vernor Vinge has won five Hugo Awards, including one for each of his last three novels, A Fire Upon the Deep (1992), A Deepness in the Sky (1999), and Rainbow’s End (2006). Known for his rigorous hard-science approach to his science fiction, he became an iconic figure among cybernetic scientists with the publication in 1981 of his novella "True Names," which is considered a seminal, visionary work of Internet fiction. His many books also include Marooned in Realtime and The Peace War. Born in Waukesha, Wisconsin and raised in Central Michigan, Vinge is the son of geographers. Fascinated by science and particularly computers from an early age, he has a Ph.D. in computer science, and taught mathematics and computer science at San Diego State University for thirty years. He has gained a great deal of attention both here and abroad for his theory of the coming machine intelligence Singularity. Sought widely as a speaker to both business and scientific groups, he lives in San Diego, California.

“Vinge has brilliantly shifted gears, offering a post singularity novel in which the singularity has been destroyed and the formerly advanced humans struggle to cope…the resulting low-tech tale is a sharply crafted masterpiece.” —Publishers Weekly

“One of the genre's most accomplished writers and storytellers, Vinge has crafted a tale that should captivate his fans and win him a larger and well-deserved audience.” —Library Journal, starred review

“Imagine bootstrapping a fallen civilization into transcendence using nothing but a collection of hive-mind Machiavellis, a crippled hyper-advanced spaceship, and a pack of surly, scheming orphaned adolescents. Oh, and then there's the vengeful god ramscooping itself to relativistic speeds a mere 30 light years away. Vinge's explosive imagination and deft storytelling make epics sail past like hummingbirds--you'll steal daytime moments to read more, and lie awake at night contemplating what you've read.” —Boing Boing

“Vernor Vinge's stories and novels have always surprised and entertained me, and The Children of the Sky carries on that grand tradition!” —Greg Bear, bestselling author of Hull Zero Three

“A Fire Upon the Deep is one of my all-time favorite works of fiction, so I've been looking forward to Children of the Sky for months. I am a particular fan of Vinge's work because, unlike the work of many science fiction writers, his writing is fiction first, with the science and technology a muted part of the background to the story. Vinge always delivers complex, realistic characters the reader can care about, along with a gripping, well-crafted plot that invariably leaves my fingers paper-cut from turning pages so eagerly. And as for the science in Vinge's science fiction, that is also exceptional in its vision and technical integrity. Vinge is undeniably one of the greatest hard science fiction writers to put pen to paper, and he can easily be compared to such greats as Arthur C. Clarke, Poul Anderson, or Stanislaw Lem.” —Wired

“What a year for Science Fiction it's been and now along comes Vernor Vinge to show us all again how this is really done with The Children of the Sky. The Children of the Sky, in short, was brilliant. No one out there does space opera like Vinge. There are books who have great plots with well thought out ideas, but normally characterization suffers because of it. The book is a showcase for a thought experiment…Vinge does it all. The characters are real and you feel for them. The book is a page turner. And the ideas are wonderful (the Tines are still up there as my favorite aliens I've ever met in a book). I loved it. I loved it. I loved it. This is a great book, but the story is not done yet. The problem is, I WANT TO KNOW THE REST, DARN IT! Now we have to wait for Vinge to finish the story. If The Children of the Sky is any indication, the wait will be well worth it in the end.” —Elitist Book Reviews

“Vinge makes it feel more like this is a living, breathing world that keeps on going, even if you're not there. And for hard science fiction, that's an accomplishment…. It's hard to say everything I want to say about novels that cover this much ground, but rest assured that this is a worthy follow-up to A Fire Upon the Deep.” —Literary Omnivore