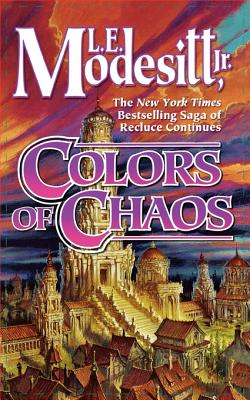 This is book number 9 in the Saga of Recluce series.

L.E. Modesitt, Jr.'s Colors of Chaos continues his bestselling fantasy series the Saga of Recluce, which is one of the most popular in contemporary epic fantasy.

Now a full mage in the White Order, Cerryl must prove himself indispensable to Jeslek, the High Wizard.

Whether through assassination, effective governance of occupied territory or the fearless and clever direction of troops in battle, Cerryl faces many harrowing obstacles—assassination, political entanglements, battlefield prowess—and Anya, the plotting seductress who's the real power behind the white wizards.

With his wits, his integrity, and the support of his love, the Black healer Leyladin, he must survive long enough to claim his rightful spot within the ruling hierarchy of the White Order.

“An intriguing fantasy in a fascinating world.”—Robert Jordan, New York Times bestselling author of The Wheel of Time® series
Saga of Recluce

“Modesitt has established himself with his Recluce series as one of the best '90s writers of fantasy.” —Vector

“Marked by high intelligence. A powerful, educated, serious, and understated imagination is plainly at work in this latest entry to a saga that is beginning to take on the complexity of Robert Jordan's Wheel of Time cycle.” —Publishers Weekly

“Tour de force of characterization, Mr. Modesitt paints the other side of the picture, adding a rare depth and richness to what is already a landmark fantasy series.” —Romantic Times (four stars)