The Death of Chaos (Saga of Recluce #5) (Paperback) 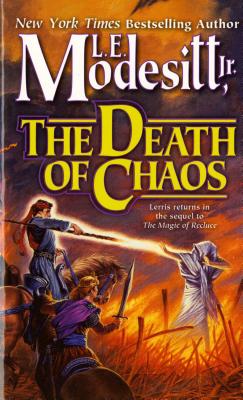 This is book number 5 in the Saga of Recluce series.

L.E. Modesitt, Jr.'s The Death of Chaos continues his bestselling fantasy series the Saga of Recluce, which is one of the most popular in contemporary epic fantasy.

A threat of invasion from the Empire of Hamor endangers Lerris' newfound peace. Despite the imminent possibility of destruction, the lands of Candar will not unite and Recluce will not heed the peril, forcing Lerris to choose between becoming the greatest wizard of all time—or seeing his whole world destroyed.

“Modesitt is an extremely intelligent writer, possessing remarkable ingenuity at creating systems of magic and a real gift for characterization.” —Booklist

“The sequel to The Magic of Recluce brings together a variety of dedicated wizards whose human struggles infuse their larger goal with poignancy and realism.” —Library Journal

“Entertaining. . . . A fantasy whose roots are dug into the reality of human nature.” —Publishers Weekly