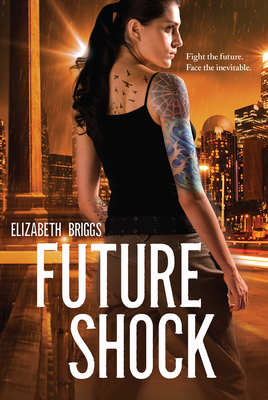 By Elizabeth Briggs
Email or call for price.
Special Order

This is book number 1 in the Future Shock series.

Elena Martinez is a tough young woman living in present-day Los Angeles. She’s been a foster kid for years, is about to turn 18, and is facing limited options for her future, until she is selected to be among an elite group of teens sent into the future via Project Chronos by the mysterious Aether Corporation. One of Elena’s qualifications for the project is her eidetic memory, which has served as more of a hindrance than a help to date. Along with four other teens with special contributions of their own, Elena is sent on a 24-hour trip to the future (with a counting clock for chapter headers) to acquire specific information for Aether, with the strict admonition not to look into their own timelines. But when things go awry, will she become a girl without a future again, literally?

Elena Martinez has hidden her eidetic memory all her life—or so she thinks. When powerful tech giant Aether Corporation selects her for a top-secret project, she can't say no. All she has to do is participate in a trip to the future to bring back data, and she'll be set for life. Elena joins a team of four other teens with special skills, including Adam, a science prodigy with his own reason for being there. But when the time travelers arrive thirty years in the future, something goes wrong and they break the only rule they were given: do not look into their own fates. Now they have twenty-four hours to get back to the present and find a way to stop a seemingly inevitable future from unfolding. With time running out and deadly secrets uncovered, Elena must use her eidetic memory, street smarts, and a growing trust in Adam to save her new friends and herself.

Elizabeth Briggs graduated from UCLA with a degree in sociology. She mentors teens in writing and is the author of the new adult series Chasing the Dream. She lives in LA with her husband and a pack of fluffy dogs. This is her first young adult novel.