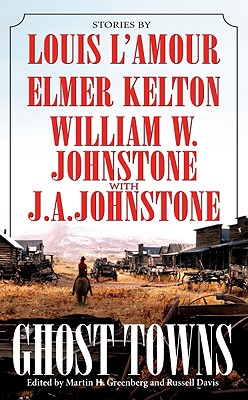 The sound of a crowded saloon . . . The cry of a train coming through the night. . . The pounding of horses ridden by friends or foe. . . From the searing sun to snow-steeped winters, towns called Sentinel, Iron Mountain and St. Elmo stood strong and fierce--before they finally died. Now, these ghost towns return to life under the spell of such great Western tale-tellers as Louis L'Amour, Elmer Kelton, William W. Johnstone, Bill Brooks, Loren D. Estleman, Johnny D. Boggs and "New York Times " bestseller Margaret Coel.
From a soldier on the run from the fires of war. . . From a gambler who has long since played his last hand to a solitary, singing rifle man protecting a besieged town . . . With dreamers and schemers, with men and women of courage, conscience and faith, here is an unforgettable round-up of astounding adventures fueled by a passion for the West the way it really was--and the way it lives on forever. . .

In 1995 Martin H. Greenberg was honored by the Mystery Writers of America with the Ellery Queen Award for lifetime achievement in mystery editing. He is also the recipient of two Anthony awards. Mystery Scene magazine called him "the best mystery anthologist since Ellery Queen." He has compiled more than 1,000 anthologies and is the president of TEKNO books. He lives in Green Bay, Wisconsin.