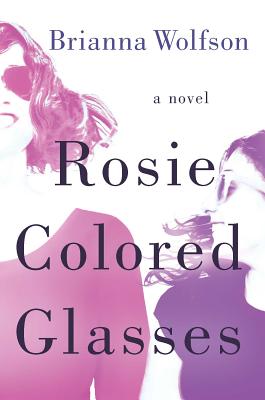 “Readers who loved Half Broke Horses will wholly embrace debut author Brianna Wolfson's Rosie Colored Glasses. Loosely based on Wolfson's own family story, Rosie Colored Glasses follows 11-year-old Willow through the divorce of her parents, the navigation of two homes, the extreme and outrageous outpourings of love from her mother, Rosie, the stoic steadfastness of her father, and the ultimate realization that Rosie's behavior, although loving and caring, may not ultimately be healthy for either of them. A quick, powerful read that will stick with you long after you turn the final page.”
— Angie Tally, The Country Bookshop, Southern Pines, NC

"What a wonderful, emotional ride It's like the Ordinary People of the 21st century...such an achievement " --Robyn Carr, #1 New York Times bestselling author of The Summer That Made Us SEEING THE WORLD THROUGH ROSIE COLORED GLASSES Just as opposites attract, they can also cause friction, and no one feels that friction more than Rex and Rosie's daughter, Willow. Rex is serious and unsentimental and tapes checklists of chores on Willow's bedroom door. Rosie is sparkling and enchanting and meets Willow in their treehouse in the middle of the night to feast on candy. After Rex and Rosie's divorce, Willow finds herself navigating their two different worlds. She is clearly under the spell of her exciting, fun-loving mother. But as Rosie's behavior becomes more turbulent, the darker underpinnings of her manic love are revealed. Rex had removed his Rosie colored glasses long ago, but will Willow do the same? Whimsical, heartbreaking and uplifting, this is a novel about the many ways love can find you. Rosie Colored Glasses triumphs with the most endearing examples of how mothers and fathers and sons and daughters bend for one another.