Whose Puck Is It, Anyway?: A Season with a Minor Novice Hockey Team (Paperback) 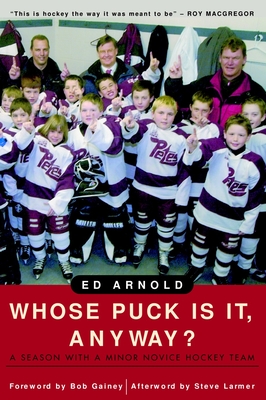 Every winter, in hockey arenas across North America, as soon as the kids step onto the ice, the abuse begins. Coaches yell at the players, parents yell at the coaches, and everyone yells at the referees. After nearly a decade of coaching youngsters, Ed Arnold decided he wanted kids to learn the fundamentals of hockey but he also wanted them to have fun. He got support in this enterprise from two former NHL players, goalie Greg Millen and forward Steve Larmer. Concerned that the children’s game was being taken far too seriously by both parents and coaches, they also believed that the kids were losing the opportunity to reinvent the game for themselves.

So it came about that in the winter of 2000, when the parents of the would-be Minor Novice Peterborough Petes showed up with their kids for tryouts, they were handed a letter outlining the coaches’ new philosophy. There would be no yelling at players, coaches, or referees. Players would play all positions. They would not be forced to follow a “systems” approach to hockey, but would be left to figure out what to do in a given situation for themselves. And all members of the team would be given equal ice time.

Not every parent liked it, but the kids sure had a good time. Readers of this inspiring book will have a wonderful time, too, as they follow the adventures of the team. Coach Larmer wears a Stanley Cup ring but he meant exactly what he said when he told a reporter that his year with the kids was the most fun he ever had in hockey.

Ed Arnold is the managing editor of The Peterborough Examiner. A winner of several Canadian Press awards, Arnold is the author of Whose Puck Is It, Anyway? and other books looking at the history of his city and area.