King of the Road (The Brotherhood of the Wheel #2) (Hardcover) 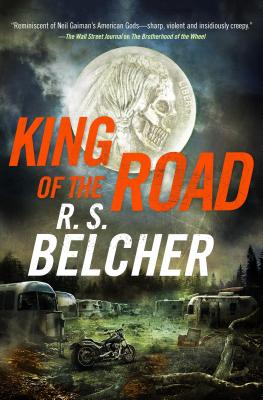 They are the Brotherhood of the Wheel: a secret society of truckers, bikers, nomads, and others who defend America’s roads and rails from unnatural threats lying in wait for unwary travelers.

Now a missing-person case leads to a string of roadside murders and mutilations that stretches back decades—and to a cult of murderous clowns who are far more than mere urban legends. Greasepaint and lunatic grins are the last things their victims ever see.
And as if that’s not trouble enough, trucker Jimmy Aussapile and his allies must also cope with a violent civil war within an outlaw biker gang long associated with the Brotherhood, as well as run-ins with a rival gang led by a fierce werewolf biker chick who fights tooth and claw to protect her pack.

From Depression-era hobo camps to a modern-day trailer park hiding unearthly secrets, fear lurks just beyond the headlights for the Kings of the Road.