By Fire Above: A Signal Airship Novel (Hardcover) 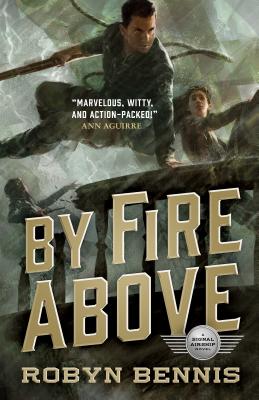 By Robyn Bennis
Unavailable to Order
Out of Print

This is book number 2 in the Signal Airship series.

By Fire Above is the rip-roaring new adventure in Robyn Bennis's Signal Airship military fantasy series that Patricia Briggs hails as “full of sass and terrific characters.”


"All's fair in love and war," according to airship captain Josette Dupre, until her hometown of Durum becomes occupied by the enemy and her mother a prisoner of war. Then it becomes, "Nothing's fair except bombing those Vins to high hell."

Before she can rescue her town, however, Josette must maneuver her way through the nest of overstuffed vipers that make up Garnia's military and royal leaders in order to drum up support. The foppish and mostly tolerated Mistral crew member Lord Bernat steps in to advise her, along with his very attractive older brother.

Between noble scheming, under-trained recruits, and supply shortages, Josette and the crew of the Mistral figure out a way to return to Durum—only to discover that when the homefront turns into the frontlines, things are more dangerous than they seem.

“Marvelous, witty and action-packed steampunk with exquisite attention to detail. Bennis's writing is incredible, her vocabulary impressive, and she honest to God made me believe you could build an airship from spare parts.”—New York Times and USA Today Bestselling author Ann Aguirre

ROBYN BENNIS works in biotech but dreams of airships. She lives in Mountain View, CA, within sight of the historic Hangar One at Moffett Airfield. She is the author of the Signal Airship series, The Guns Above and By Fire Above.

“Bennis opens and closes with fierce combat sequences and layers in knotty questions about how to distinguish between loyalty and romance from love, and balance obedience to superiors with duty to subordinates, all starkly highlighted by life-or-death decisions forced on the characters. Readers will hear both the crackle of musket fire and the heartfelt cries of honest self-admission in this rich adventure.” —Publishers Weekly

Praise for the Signal Airship series

“Marvelous, witty, gory AF, action-packed steampunk with exquisite attention to detail. Bennis's writing is incredible, her vocabulary impressive, and she honest to God made me believe you could build an airship from spare parts.”—New York Times and USA Today Bestselling author Ann Aguirre

“The Guns Above is a sharp, witty Ruritanian adventure full of flintlock rifles, plumed shakos, brass buttons... and airships! Taking place in an alternate mid-nineteenth-century Europe where dirigibles ply the smoky air over battlefields and women have been grudgingly admitted to the air corps,The Guns Above takes a clear-eyed, even cynical view of the 'glories' of war, complete with blood, shit, shattered limbs, and petty squabbles among the nobility. The aerial combat is gut-clenchingly realistic, the two viewpoint characters are well-drawn and as different as can be, and the action never stops. Hard women learn compassion, soft men learn bravery, and the fate of a nation depends on one rickety airship and its stalwart crew. A winner!” —David D. Levine, author of Arabella of Mars

“An engaging gunpowder adventure with a helping of witty Noel Coward dialogue and a touch of Joseph Heller.” —Tina Connolly, Nebula Award-nominated author of Ironskin

“Wonderfully adventurous and laudably detailed. Bennis paints airship battles so clearly you'd swear they were from memory.” —Becky Chambers, author of The Long Way to a Small, Angry Planet

“Most airships seem to be powered by handwaving, but Bennis builds hers out of solid, believable detail. You couldn't pay me enough to go up in one of those flying death-traps, but I never question for an instant why Josette does, and I'm cheering for her every step of the way.“—Marie Brennan, author of A Natural History of Dragons

“Buckle in. The crew of the Mistral will take readers on adventures they won’t soon forget.” —Pip Ballantine, author of The Ministry of Peculiar Occurrences series

“Hold on to your goggles, Bennis' The Guns Above is a nonstop ride.” —Suzanne Lazear, author of The Aether Chronicles Series

“A fast-paced military fantasy, full of colourful characters and quirky humour that had me laughing throughout. Every fan of airships should read this.” —Marc Turner, author of Dragon Hunters

“Entertaining from start to finish, laced with brash banter and characters full of grit, muscle, and heart.”—Jacqueline Koyanagi, author of Ascension

“Bennis writes a pleasing mix of banter and gritty battle scenes, combining both the adrenaline rush of combat and its horrifying results, and never indulging in too-sudden social victories that might cheapen the long struggle against embedded prejudice.” —Publishers Weekly

“An exciting new world that will attract steampunk fans of all ages and leave them hoping for more.” —Booklist

“An inventive military fantasy that will grab readers at the first page. Delightful, memorable characters make up Bennis’ debut, along with her concise, amusing storytelling. Without a doubt, Bennis’ latest is a highly entertaining read.”—RT Book Reviews, four stars

“A fun blend of flintlock rifles, airships, military exercises, and wry commentary on both gender politics and 'military intelligence.' There’s enough whip-smart dialogue to make any reader laugh out loud, and readers who are mechanically inclined will love the detailed descriptions of gears, flight tests, and ballast.” —Fantasy Literature

“Delightfully dry whistle-past-the-graveyard humour, a soupçon of sarcasm, and an approach to military action that reminds me of nothing so much as Forrester’s Hornblower or Cornwell’s Sharpe novels—but with airships and female officers....The Guns Above is an immensely entertaining, fast-paced adventure.” —Liz Bourke, Tor.com

"Airships, kick-ass women, and military fiction with a hint of fantasy… I mean, really, what more could you want?" —Nerdophile

“Although The Guns Above may be author Robyn Bennis’ first published novel, it certainly reads as though she’s found her voice— and a great story to boot.” —Culturess