In the Region of the Summer Stars: Eirlandia, Book One (Eirlandia Series #1) (Hardcover) 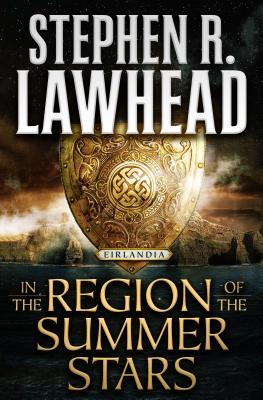 By Stephen R. Lawhead
Unavailable to Order
Hard to Find

This is book number 1 in the Eirlandia Series series.

In the Region of the Summer Stars is a new Celtic fantasy from Stephen R. Lawhead, the critically-acclaimed author of the Pendragon Cycle.

Ravaged by barbarian Scálda forces, the last hope for Eirlandia lies with the island’s warring tribes.

Wrongly cast out of his tribe, Conor, the first-born son of the Celtic king, embarks on a dangerous mission to prove his innocence.

What he discovers will change Eirlandia forever. For the Scálda have captured the mystical Fae to use as an ultimate weapon.

And Conor’s own people have joined in the invasion.

The Eirlandia Series:
#1) In the Region of the Summer Stars
#2) In the Land of the Everliving
#3) In the Kingdom of All Tomorrows

STEPHEN R. LAWHEAD is the internationally renowned author of the bestselling Pendragon Cycle, which received critical acclaim for its creative retelling of the Arthur legend and its historical credibility. In addition to that series, he is the author of more than 28 novels and numerous children's and nonfiction books of fantasy and imaginative fiction, including the award-winning Song of Albion trilogy. Lawhead makes his home in Oxford, England, with his wife, Alice.

Praise for In the Region of the Summer Stars

“Fierce companions, mighty foes, and fae magic all intertwine with multiple points of view in an exciting tale.”—Booklist

“Lawhead brilliantly creates an authentic and vivid Arthurian Britain, and never forsakes a sense of wonder.”—Publishers Weekly on Pendragon

“Lawhead demonstrates a genuine love for and understanding of Anglo-Celtic mythology.”—Library Journal on The Paradise War

“Lawhead treats his Celtic lore with respect.”—Kirkus on The Paradise War

“In the sweeping style of George R.R. Martin and J.R.Tolkien, Lawhead has created a diverse universe and rich cast of characters.”—Library Journal on Bright Empires