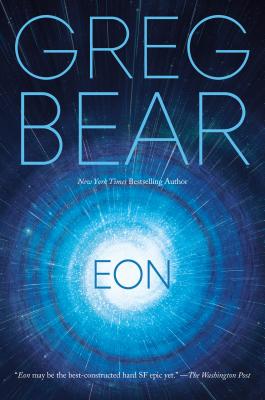 This is book number 1 in the Eon series.

The 21st century was on the brink of nuclear confrontation when the 300 kilometer-long stone flashed out of nothingness and into Earth's orbit. NASA, NATO, and the UN sent explorers to the asteroid's surface...and discovered marvels and mysteries to drive researchers mad.

And museums describing the Death; the catastrophic war that was about to occur; the horror and the long winter that would follow. But while scientists and politicians bickered about how to use the information to stop the Death, the Stone yielded a secret that made even Earth's survival pale into insignificance.

Greg Bear is the author of more than thirty books of science fiction and fantasy, including The Forge of God, Eon, Slant, and the Nebula Award winning novel Moving Mars.  He has also written gaming tie-ins such as Halo: Cryptum, and Hull Zero Three. Awarded two Hugos and five Nebulas for his fiction, he is one of only two authors to win a Nebula in every category. He has been called the "Best working writer of hard science fiction" by The Ultimate Encyclopedia of Science Fiction. His stories have been collected into an omnibus volume by Tor Books, The Best of Greg Bear. Bear has served on political and scientific action committees and has advised Microsoft Corporation, the U.S. Army, the CIA, Sandia National Laboratories, Callison Architecture, Inc., and other groups and agencies. He is married to Astrid Anderson Bear and is the father of Erik and Alexandra.

“Hard science and human interest intersect ingeniously in the prequel to Bea's Eon and Eternity....This is a stunning SF novel that extrapolates a scientifically complex future from the basic stuff of human nature.” —Publishers Weekly, starred review, on Legacy

“Each new novel only serves to illustrate how masterful Bear has become.” —Houston Post on Greg Bear

“Whether he's tinkering with human genetic material or prying apart planets, Bear goes about the task with intelligence and a powerful imagination.” —Locus on Greg Bear

“A cohesive and original vision of the future. Bear has combined a lively set of characters, colorful writing and gripping psychological-technological fabrications into a very seductive read.” —People Magazine on Queen of Angels

“The ambitiousness of Greg Bear's Eon lies more in the mainstream of science fiction... its uniqueness arises from Bear's bold imagination. Bear is a writer of passionate vision. Eon is his grandest work yet.” —Locus on Greg Bear

“Bear is one of our very best.” —New York Daily News on Greg Bear

“If anyone is the complete master of the grand scale SF novel, it's Bear.” —Booklist on Greg Bear