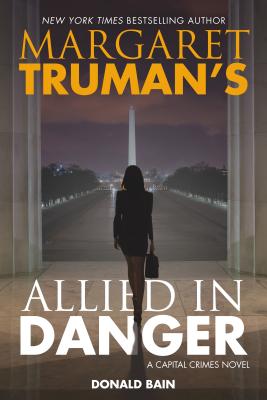 This is book number 30 in the Capital Crimes series.

David Portland works security for America’s British Embassy in London. His life is upended when his son Trevor dies mysteriously in Nigeria, while employed by a suspicious security/mercenary company known as SureSafe. One night, Portland sees a man in a bar wearing a bracelet—a family heirloom, which he had given his son—and attacks the man. The information he learns will send Portland down a rabbit-hole of deadly deception—one which he hopes will lead him to the truth about his son’s death.

Meanwhile, Robert Brixton, a noted Washington DC-based international investigator, has been hired to look into a fraudulent charity and a criminal warlord in Nigeria. His life and his investigations will soon become intertwined with Portland’s probe and that of his estranged, ex-wife, Elizabeth. Their interconnected cases will take Brixton to Nigeria, into that country’s Heart of Darkness and on one of the most violent and dangerous journeys of his life.

“Truman can write suspense with the best of them.” -Larry King

“[A] satisfying tale . . . remarkably fresh in its insights about politics, intrigue, money and sex in the city by the Potomac.” -The News & Observer (Raleigh, NC) on Murder on K Street

“Truman ‘knows the forks’ in the nation’s capital and how to pitchfork her readers into a web of murder and detection.” -The Christian Science Monitor

“Truman has produced another knowing look at Washington politics. She, of all people, should know her characters well, and she draws them with style.” -The Dallas Morning News on Murder at Union Station

“[A] satisfying tale . . . remarkably fresh in its insights about politics, intrigue, money and sex in the city by the Potomac.” -The News & Observer (Raleigh, NC) on Murder on K Street

“Political junkies of all stripes should find something to feed their appetites.” -Publishers Weekly on Margaret Truman’s Experiment in Murder

“Ripe with suspense, Truman’s mystery gets edgier with each page. . . . A captivating, fast-paced thriller.” -RT Book Reviews on Murder at the Washington Tribune