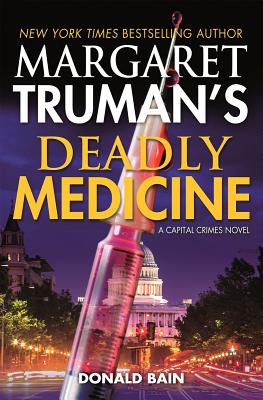 This is book number 29 in the Capital Crimes series.

If someone in the pharmaceutical industry came upon a cheaper, non-addictive, and more effective painkiller, would he kill for it?

Washington D.C. private detective Robert "Don't call me Bobby" Brixton, along with his mentors, attorneys Mac and Annabel Smith, discover that the answer is a resounding "Yes," as they try to help Jayla King, a medical researcher at a small D.C. pharmaceutical firm, carry on the work of her father. His experiments in the jungles of Papua New Guinea in search of such a breakthrough product led to his brutal murder and the theft of his papers.

Did Jayla's father's lab assistant kill the doctor and steal his research? Is this shadowy figure prepared to kill again to keep Jayla from profiting from her father's work? Does her recent paramour's romantic interest reflect his true feelings--or will he sell her out and reap the rewards for himself? And to what lengths would Big Pharma's leading lobbyist go to cover up his involvement, and to protect a leading champion of the pharmaceutical industry--a Georgia senator with a shady past?

As Mac, Annabel, and Brixton soon realize, no pill can ease the pain that the answers to these questions inflict on everyone in this tale of greed, betrayal--and murder.

“[A] satisfying tale . . . remarkably fresh in its insights about politics, intrigue, money and sex in the city by the Potomac.” —The News & Observer (Raleigh, NC) on Murder on K Street

“Truman ‘knows the forks’ in the nation’s capital and how to pitchfork her readers into a web of murder and detection.”—The Christian Science Monitor

“Truman has produced another knowing look at Washington politics. She, of all people, should know her characters well, and she draws them with style.” —The Dallas Morning News on Murder at Union Station

“[A] satisfying tale . . . remarkably fresh in its insights about politics, intrigue, money and sex in the city by the Potomac.” —The News & Observer (Raleigh, NC) on Murder on K Street

“Political junkies of all stripes should find something to feed their appetites.” —Publishers Weekly on Margaret Truman’s Experiment in Murder

“Ripe with suspense, Truman’s mystery gets edgier with each page. . . . A captivating, fast-paced thriller.” —RT Book Reviews on Murder at the Washington Tribune