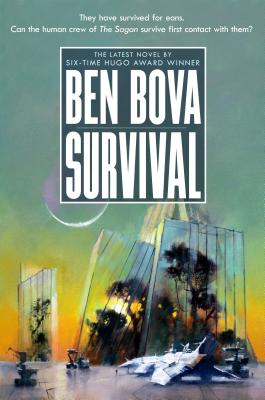 By Ben Bova
Unavailable to Order
Hard to Find

This is book number 3 in the Star Quest Trilogy series.

In Surivival, a human team sent to scout a few hundred lightyears in front of the death wave encounters a civilization far in advance of our own, a civilization of machine intelligences.

These sentient, intelligent machines have existed for eons, and have survived earlier “death waves,” gamma ray bursts from the core of the galaxy. They are totally self-sufficient, completely certain that the death wave cannot harm them, and utterly uninterested in helping to save other civilizations, organic or machine.

But now that the humans have discovered them, they refuse to allow them to leave their planet, reasoning that other humans will inevitably follow if they learn of their existence.

Science Fiction and Fantasy Books to Read This December—The Verge

“ This is thoughtful, humanist SF with a finely sharpened scientific edge, an absolute gem of the genre.”—The Nameless Zine

“[Bova’s] excellence at combining hard science with believable characters and an attention-grabbing plot makes him one of the genre’s most accessible and entertaining storytellers.” —Library Journal

“A guaranteed crowd-pleaser!” —Booklist on Mercury