Last First Snow: A Novel of the Craft Sequence (Paperback) 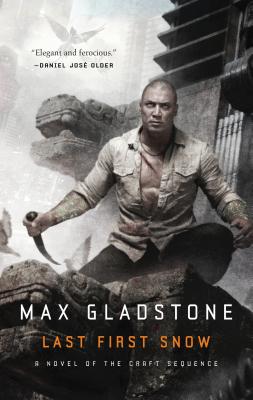 This is book number 4 in the Craft Sequence series.

“Brilliant, elegant, epic, astonishing, smart, gritty…. another wondrous visit to the fantastic world of the Craft Sequence.” —Ken Liu, author of The Grace of Kings

Forty years after the God Wars, Dresediel Lex bears the scars of liberation-especially in the Skittersill, a poor district still bound by the fallen gods' decaying edicts. As long as the gods' wards last, they strangle development; when they fail, demons will be loosed upon the city. The King in Red hires Elayne Kevarian of the Craft firm Kelethres, Albrecht, and Ao to fix the wards, but the Skittersill's people have their own ideas. A protest rises against Elayne's work, led by Temoc, a warrior-priest turned community organizer who wants to build a peaceful future for his city, his wife, and his young son.

As Elayne drags Temoc and the King in Red to the bargaining table, old wounds reopen, old gods stir in their graves, civil blood breaks to new mutiny, and profiteers circle in the desert sky. Elayne and Temoc must fight conspiracy, dark magic, and their own demons to save the peace-or failing that, to save as many people as they can.

“Entertaining and intelligent, Last First Snow will take fans of urban fantasy to exciting new territory. While not as easy for new readers to follow, the compelling tale at the center is worth the effort. Gladstone’s worldbuilding is an intricate creation with all the modern trappings of today and combined with an action-packed adventure fantasy.” —RT Book Reviews

“Gladstone adds to his outstanding Craft sequence with a tense legal thriller (the first volume chronologically, but the fourth one published) centered on the Skittersill Rising, an event that sets the scene for the events of 2013’s Two Serpents Rise. Twenty years after the defeat of the gods of the land called Dresediel Lex, Craftswoman and lawyer Elayne Kevarian attempts to broker a land management deal for the Dresediel Lex neighborhood of Skittersill. Interested parties include the King in Red, a conqueror of gods; landholder Tan Batac; and priest Temoc Almotil. An encampment of protesters, defiant in the face of impending gentrification, complicates matters. As the specter of civil unrest looms, Elayne navigates old enmities, conspiracy, and rampant greed. Meanwhile, Temoc is torn between his responsibilities to the protestors who look to him for leadership, and his love and devotion to his wife and young son. Gladstone’s gift for vivid storytelling, his deep empathy for his characters, his sly satire of current socioeconomic issues, and the rich, diverse world of his novels have become reliable pleasures, always enthralling and somehow consistently improving with every book.” —Publishers Weekly, starred review

“Elegant and ferocious, Last First Snow bursts with unrelenting urgency. It is a book that wraps us in its complex embrace while demanding we look more deeply at the changing world. Politics and protest violently converge in this full throttle race through the unruly streets of Dresediel Lex, and there is no flinching from difficult truths. This is Max Gladstone at his finest.” —Daniel José Older, author of Half Resurrection Blues

“The Craft Sequence gets better with each volume. Max Gladstone gives us wonderfully relevant bits and pieces of the modern world, turned upside-down and inside-out and garnished with skeleton kings, serpent gods, and lawyer-magicians. It’s glorious.” —Django Wexler, author of The Thousand Names