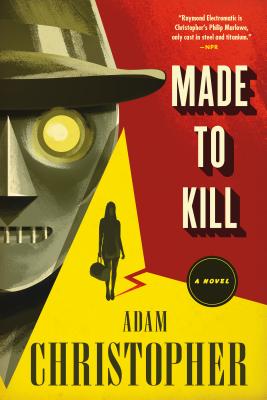 This is book number 1 in the Ray Electromatic Mysteries series.

Made to Kill is a hard-boiled, pulp SF thriller with Ray Electromatic, the last sentient robot, cast as an analog Philip Marlowe, who solves cases by day and turns hitman at night, when his memory tape gets switched by his boss, a chain-smoking supercomputer named Ada. Rip off your E-ticket and take this thrill ride, filled with black comedy, sultry femmes fatales, Soviet spies, and secret weapons of mind control.  At stake is nothing less than the American Dream, cast in false light upon a silver screen. I loved the way Christopher took the retro SF tropes and filtered them through the lens of Raymond Chandler, parodying Chandler’s language and gritty noir style while capturing its essence in his weird comic love note. The odd choice of setting the book in alt-’65, despite the fact that everything but the date screams 1940s, makes cold war fears and McCarthyism's chilling effect on Hollywood the real boogeymen of the story. As Ray hurtles down the Boulevard of Broken Dreams, the grit and glitter blow back from existential themes of moral culpability and identity, making this pulp fiction a worthy read. – R. J. Crowther Jr.

What I found most interesting about the whole book is the comment from the author as to when asked what "lost manuscript" by a dead author would he like to have been found, he said Raymond Chandler.  And then the "what if" part-what if it was a sci-fi novel, even though it was known that Chandler didn't care for SF. This made reading the novel even more interesting to me. – Linda Tonnesen

“Meet Raymond Electromatic, private detective tuned assassin. Oh, and he's also the world's last robot. It's just another day in 1965 Hollywood and business as usual for Ray and his boss, Ada. That is, until a mysterious woman shows up with a duffel bag full of unmarked gold bars and a request. Unable to pass up all that money, Ray takes the case. Soon, Ray discovers that this is no regular 'find him and assassinate him' kind of job. Made to Kill brings back noir with a stylish new twist in this captivating tale for people of all makes and models!”
— Jennifer Steele (M), Boswell Book Company, Milwaukee, WI

It was just another Tuesday morning when she walked into the office—young, as I suspected they all might be, another dark brunette with some assistance and enough eye black to match up to Cleopatra. And who am I? I'm Ray, the world's last robot, famed and feared in equal measure, which suits me just fine—after all, the last place you'd expect to find Hollywood's best hit man is in the plain light of day.

Raymond Electromatic is good at his job, the lone employee of the Electromatic Detective Agency—except for Ada, office gal and super-computer, the constant voice in Ray's inner ear. Ray might have taken up a new line of work, but money is money, after all, and he was programmed to make a profit. Besides, with his twenty-four-hour memory-tape limits, he sure can keep a secret.

When a familiar-looking woman arrives at the agency wanting to hire Ray to find a missing movie star, he's inclined to tell her to take a hike. But she had the cold hard cash, a demand for total anonymity, and tendency to vanish on her own.

Plunged into a glittering world of fame, fortune, and secrecy, Ray uncovers a sinister plot that goes much deeper than the silver screen—and this robot is at the wrong place, at the wrong time.

Made to Kill is the thrilling new speculative noir from novelist and comic writer Adam Christopher.

"The dialogue is effortlessly swift and clever, and even the B-movie climax is a spectacle to behold. Above that, though, Ray sparks to live, and his antiheroic slant only makes him that much more compelling and and sympathetic. Knowing that there are only two more Raymond Electromatic mysteries to come is the book's only disappointment."—NPR

"A fun, fast read for anyone willing to take the speculative leap--a must-add for most fiction collections."—Booklist (starred review)