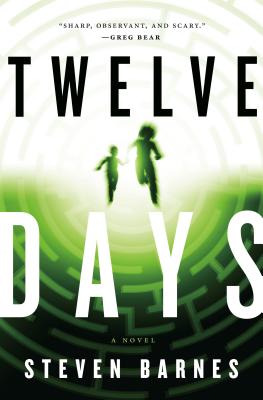 A paranormal thriller from master storyteller Steven Barnes: A broken family struggles to hold itself together against a plot to unleash global genocide in Twelve Days

Around the world, leaders and notorious criminals alike are mysteriously dying. A terrorist group promises a series of deaths within two months. And against the backdrop of the apocalypse, the lives of a small shattered family and a broken soldier are transformed in the bustling city of Atlanta.

Olympia Dorsey is a journalist and mother, with a cynical teenage daughter and an autistic son named Hannibal, all trying to heal from a personal tragedy. Across the street, Ex–Special Forces soldier Terry Nicolas and his wartime unit have reunited Stateside to carry out a risky heist that will not only right a terrible injustice, but also set them up for life—at the cost of their honor. Terry and the family's visit to an unusual martial arts exhibition brings them into contact with Madame Gupta, a teacher of singular skill who offers not just a way for Terry to tap into mastery beyond his dreams, but also for Hannibal to transcend the limits of his condition. But to see these promises realized, Terry will need to betray those with whom he fought and bled.

Meanwhile, as the death toll gains momentum and society itself teeters on the edge of collapse, Olympia's fragile clan is placed in jeopardy, and Terry comes to understand the terrible price he must pay to prevent catastrophe.

Steven Barnes is the author of several science fiction classics. His first collaboration with Larry Niven, The Locusts, was nominated for the 1980 Hugo award. He has also written several episodes for The Outer Limits, Baywatch, and other television shows. He lives in Longview, Washington.

"Profound and exhilarating." —Maurice Broaddus, author of The Knights of Breton Court

“Barnes gives us characters that are vividly real people, conceived with insight and portrayed with compassion and rare skill—and then he stokes the suspense up to levels that will make the reader miss sleep and be late for work.” —Tim Powers, World Fantasy Award-winning author

“[Barnes] combines imagination, anthropology and beautiful storytelling as he takes readers to the foot of the Great Mountain, today known as Mount Kilimanjaro.” —Durham Triangle Tribune on Great Sky Woman