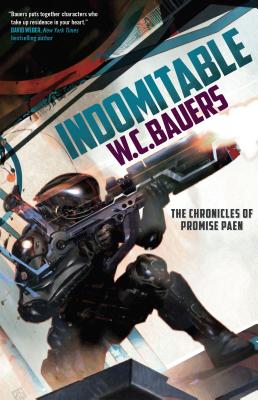 By W. C. Bauers
Unavailable to Order
Out of Print

This is book number 2 in the Chronicles of Promise Paen series.

Promise Paen, captain of Victor Company's mechanized armored infantry, is back for another adventure protecting the Republic of Aligned Worlds.

Lieutenant Paen barely survived her last encounter with the Lusitanian Empire. She's returned home to heal. But the nightmares won't stop. And she's got a newly reconstituted unit of green marines to whip into shape before they deploy. If the enemies of the RAW don't kill them first, she just might do the job herself.

Light-years away, on the edge of the Verge, a massive vein of rare ore is discovered on the mining planet of Sheol, which ignites an arms race and a proxy war between the Republic and the Lusitanians. Paen and Victor Company are ordered to Sheol, to reinforce the planet and hold it at all costs.

On the eve of their deployment, a friendly fire incident occurs, putting Paen's career in jeopardy and stripping her of her command. When the Lusitanians send mercenaries to raid Sheol and destabilize its mining operations, matters reach crisis levels. Disgraced and angry, Promise is offered one shot to get back into her mechsuit. But she'll have to jump across the galaxy and possibly storm the gates of hell itself.