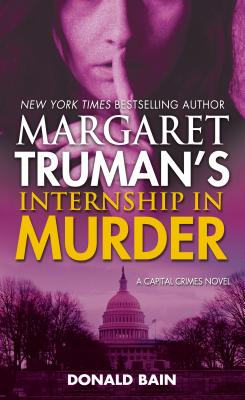 This is book number 28 in the Capital Crimes series.

A young intern at a congressional office is murdered in Margaret Truman's Internship in Murder, a gripping installment in the New York Times bestselling Capital Crimes series

Twenty-two-year-old Laura Bennett is thrilled when she lands an internship in a congressional office in Washington, D.C. Her boss, Congressman Hal Gannon, is serving his fourth term in the U.S. House of Representatives. The handsome—and married—Gannon is a rumored womanizer, and indeed, he and Laura quickly strike up an affair.

Laura’s dreams of a future with the Congressman are dashed when she catches a stewardess at his apartment. She vows to Gannon that she will destroy him, and before long, rumor of their affair begins to spread across town. Then Laura goes missing. Private investigator Robert Brixton, a former cop who has also worked for the FBI, questions Gannon. The congressman vehemently denies having anything untoward to do with Laura, but Brixton’s suspicions return in full force when Laura is found dead in the congressional cemetery.