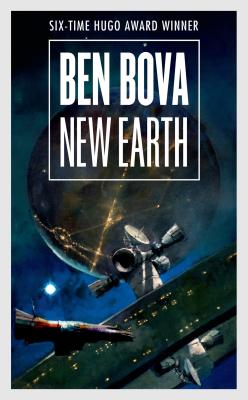 This is book number 1 in the Star Quest Trilogy series.

We've found an Earthlike planet, but what secrets does it hold?

In Ben Bova's New Earth, The world is thrilled by the discovery of an Earthlike planet. Advance imaging shows oceans of liquid water and a breathable, oxygen-rich atmosphere. A human exploration team is dispatched to explore the planet, now nicknamed New Earth. The explorers understand they're on a one-way mission. The trip takes eighty years one way, so even if they are able to return to Earth, nearly two hundred years will have passed. Their friends and family will be gone. The explorers are not the best available: they are expendable. Upon landing on the planet they find a group of intelligent creatures who look like humans. Are they native to this world or invaders? Moreover, the scientists begin to realize that the planet cannot be natural. Rather, could New Earth be an artifact?

“Bova proves himself equal to the task of showing how adversity can temper character in unforeseen ways.” —The New York Times

“[Bova's] excellence at combining hard science with believable characters and an attention-grabbing plot makes him one of the genre's most accessible and entertaining storytellers.” —Library Journal