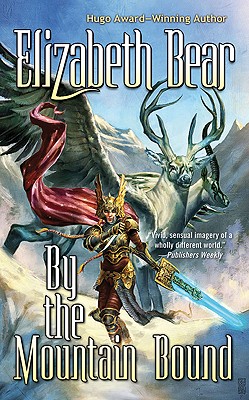 For five hundred years the immortal Children of the Light, einherjar and valkyrie, have lived together in the North of Valdyrgard. They were born out of the Sea, each with a shining crystal sword in his or her hand; they are Angels of Light created in the formation of a new world. But three have come before them, from the death-throes of the old world, Midgard: the world-girdling Serpent, Bearer of Burdens; the Wolf Fenris, eater of the Sun, who now takes the form of an einherjar; and his demon sister, stealer of souls.
The Children spend their days feasting, fighting, hunting, and guarding their human charges. But one dreadful day a woman is washed up from the sea, a Lady who is no mortal, though she is not valkyrie either. Thus begins the breaking of the Children of the Light, the tarnishing of their power, and the death of Valdyrgard.
"By the Mountain Bound" is a prequel to Elizabeth Bear's highly acclaimed "All the Windwracked Stars," and tells the painful tale of love and betrayal, sorcery and battle, that led up to the day when Muire was left alone in the snow at the end of the world.

ELIZABETH BEAR is a two-time Hugo Award winning writer. She is the author of fourteen previous novels, including the first two books of The Edda of Burdens: "All the Windwracked Stars "and "By the Mountain Bound." She lives in Connecticut.

Praise for All the Windwracked Stars:

"Bear creates a world with an astonishing depth of mythology in a tale that begins with Ragnarok…Bear’s world building echoes the best of Zelazny and pulls the reader into the story and the history until it’s over. Muire is one of Bear’s more interesting and likable characters, and the mythology Bear deploys promises further satisfying stories based in it."--Booklist (starred review)

"Bear's ability to create breathtaking variations on ancient themes and make them new and brilliant is, perhaps, unparalleled in the genre.  Her lyrical style and heroically flawed characters make this a priority purchase for most libraries.  Highly recommended."--Library Journal (starred review)

Praise for By the Mountain Bound:

“Numerous fantasy authors adopt the tropes of Norse mythology, but Bear actively pursues them, channeling those myths directly rather than overlaying them on more familiar ones. The result demands much from readers, but repays it in vivid, sensual imagery of a wholly different world.”--Publishers Weekly