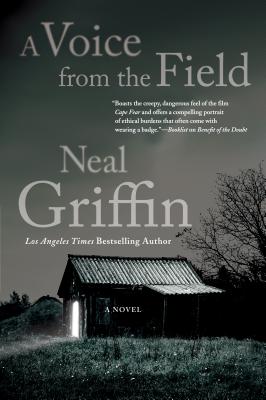 By Neal Griffin
Unavailable to Order
Out of Print

This is book number 2 in the The Newberg Novels series.

Tia Suarez jumped off the pages in Griffin's brilliant debut novel, Benefit of the Doubt. Now she takes center stage in her own story, A Voice from the Field, a gripping thriller about human trafficking in the U.S.

Gunther Kane and his white supremacist group are using forced prostitution to finance the purchase of automatic weapons. Kane snatches young women off the streets and sells them to hundreds of men. When a victim is used up, she's killed and dumped. After all, there are always more where she came from.

Physically recovered from being shot but struggling with PTSD, Tia Suarez almost doesn't believe her eyes when she glimpses a Hispanic teenager bound and gagged in the back of Kane's van. The look of terror on the woman's face makes Tia desperate to rescue her.

Kane's in the crosshairs of the FBI, who don't want a small-town Wisconsin detective messing up their big gun bust.

Tia Suarez doesn't back down for anyone. Not the department shrink; not the feds who dismiss her; not even her boyfriend, a Marine veteran who thinks she doesn't know what she's getting into. Tia will find the missing teen come hell or high water.

Neal Griffin is the Los Angeles Times bestselling author of Benefit of the Doubt. The son of a philosophy professor, Griffin grew up in Eau Claire, WI, a town much like Newberg, the setting of his first novels. After a stint in the Marines, Griffin went into law enforcement, and is currently Criminal Investigations Division Commander in a small city in California. He is a graduate of the FBI's invitation-only National Academy training program and is a certified Master Instructor in law enforcement leadership and ethics. Griffin is married to Olga Diaz and has four children.

Neal Griffin joins an illustrious line of cops-turned writers with this fine debut. The police work is definitive, the emotions run high, and hero Ben Sawyer is one you will root for. —T. Jefferson Parker, New York Times bestselling author

Benefit of the Doubt is a taut, hard-hitting morality play set in small town America, but rich with big themes: revenge, betrayal and redemption. Neal Griffin is the new kid in town, and he is here to stay. —Andrew Gross, New York Times bestselling author

A scathing peek into the darkness that permeates small town Americana. Drawn in vibrant colors upon an ambitious canvas, this major debut is destined to take its place alongside the work of Robert Parker, C.J. Box, and Harlan Coben when it comes to unrelenting suspense and wondrously staged, multi-layered construction served up suburban style. As visually stunning as it is viscerally gripping...one of the best crime novels of the year! —Jon Land, author of Strong Rain Falling

A complicated killer seeking revenge is hunted by a complicated lawman in this unique and suspenseful debut novel by a cop-turned-author who knows the turf. —Joseph Wambaugh, New York Times bestselling author