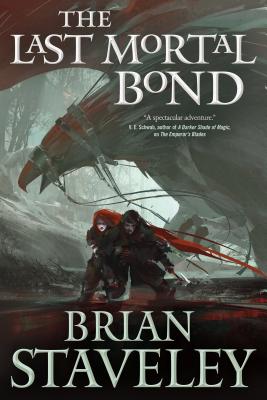 By Brian Staveley
Unavailable to Order
Out of Print

The trilogy that began with The Emperor's Blades and continued in The Providence of Fire reaches its epic conclusion, as war engulfs the Annurian Empire in Brian Staveley's The Last Mortal Bond

The ancient csestriim are back to finish their purge of humanity; armies march against the capital; leaches, solitary beings who draw power from the natural world to fuel their extraordinary abilities, maneuver on all sides to affect the outcome of the war; and capricious gods walk the earth in human guise with agendas of their own.

But the three imperial siblings at the heart of it all--Valyn, Adare, and Kaden--come to understand that even if they survive the holocaust unleashed on their world, there may be no reconciling their conflicting visions of the future.

Other books in the world of the Unhewn Throne
Skullsworn

Brian Staveley has an MA in Creative Writing from Boston University. He works as an editor for Antilever Press, and has published poetry and essays, both in print and on-line. He is the author of The Emperor's Blades.

“Darker and fiercer than the other two books […] the way Staveley crafts the ending, bringing everything together, is just masterful.” —Speculative Herald

“The Chronicle of the Unhewn Throne is a trilogy that’s gone from strength to strength as it’s gone on—that’s gotten not just bigger but measurably better with every increasingly vital volume—and it’s my pleasure to tell you that The Last Mortal Bond is, without question, Staveley’s most impressive and immersive effort yet […] What I didn’t expect was that it would take my breath away. But it did.”—Tor.com

“Staveley shows how to end a fantasy epic with The Last Mortal Bond.”—io9

“One of the most brutal, gut-wrenching, raw, emotional, masterfully told, brilliantly plotted, beautifully written series I have ever had the pleasure of reading.”—The Book Eaters

“A phenomenon like the Chronicle of the Unhewn Throne comes along once in a lifetime.”—The Qwillery

“Epic does not even begin to describe this dramatic third and final installment in the Chronicle of the Unhewn Throne.”—Bibliosanctum

“The perfect ending to a fantastic trilogy.”—Beauty in Ruins