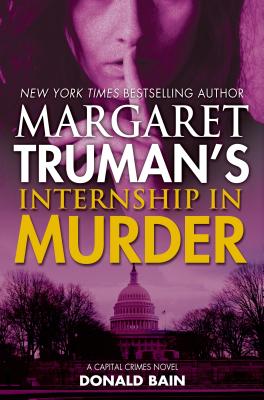 This is book number 28 in the Capital Crimes series.

Laura is a young intern in Washington, D.C., working for handsome and likable Congressman Hal Gannon. Laura falls for the charming Gannon, but when she catches a stewardess at Gannon's apartment, she vows to destroy him.

Private investigator Robert Brixton is a former cop who has also worked for the FBI. When Laura goes missing, Brixton is hired by Laura's family to gain insight into the case that the police might have missed.

Brixton tracks down rumors about Gannon—a staunchly moral "family advocate" according to his political position, but a womanizer according to gossip—but the congressman vehemently denies having anything untoward to do with Laura. Then Laura is found dead in the congressional cemetery, and many more questions are raised. . .

Margaret Truman won faithful readers with her works of biography and fiction, particularly her Capital Crimes mysteries. Her novels let readers into the corridors of power and privilege, and poverty and pageantry, in the nation’s capital. She was the author of many nonfiction books, including The President’s House, in which she shared some of the secrets and history of the White House, where she once resided. She lived in Manhattan.

“Truman ‘knows the forks' in the nation's capital and how to pitchfork her readers into a web of murder and detection.” —The Christian Science Monitor

“A dazzling series.” —The Atlanta Journal-Constitution