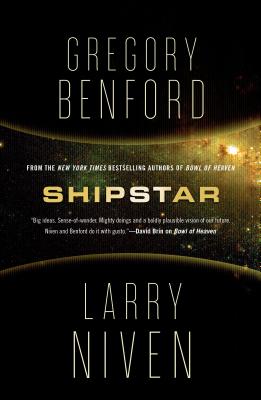 By Gregory Benford, Larry Niven
Unavailable to Order
Out of Print

This is book number 2 in the Bowl of Heaven series.

Science fiction masters Larry Niven (Ringworld) and Gregory Benford (Timescape) continue the thrilling adventure of a human expedition to another star system that is jeopardized by an encounter with an astonishingly immense artifact in interstellar space: a bowl-shaped structure cupping a star, with a habitable area equivalent to many millions of Earths. And which, tantalizingly, is on a direct path heading toward the same system the human ship is to colonize.

Investigating the Bowl, or Shipstar, the human explorers are separated—one group captured by the gigantic structure's alien inhabitants, the other pursued across its strange and dangerous landscape—while the mystery of the Shipstar's origins and purpose propel the human voyagers toward discoveries that transform their understanding of their place in the universe.

GREGORY BENFORD teaches at the University of California and lives in Irvine, California. Benford is a winner of the United Nations Medal for Literature, and the Nebula Award for his novel Timescape. In 1995 he received the Lord Prize for contributions to science. Benford conducts research in plasma turbulence theory and experimentation, and in astrophysics. He has published well over a hundred papers in fields of physics from condensed matter, particle physics, plasmas and mathematical physics, and several in biological conservation.

Larry Niven is the award-winning author of the Ringworld series, along with many other science fiction masterpieces and fantasy including the Magic Goes Away series. His Beowulf's Children, co-authored with Jerry Pournelle and Steven Barnes, was a New York Times bestseller. He has received the Nebula Award, five Hugos, four Locus Awards, two Ditmars, the Prometheus, and the Robert A. Heinlein Award, among other honors. He lives in Chatsworth, California.

"The story is a solid adventure and entertaining speculation on the lives of alien creatures."—Booklist