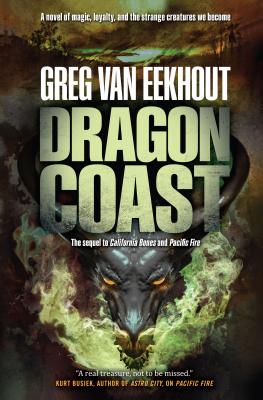 By Greg van Eekhout
Unavailable to Order
Out of Print

This is book number 3 in the Daniel Blackland series.

Dragon Coast: the sequel to Greg Van Eekhout's California Bones and Pacific Fire, in which Daniel Blackland must pull off the most improbable theft of all.

Daniel's adopted son Sam, made from the magical essence of the tyrannical Hierarch of Southern California whom Daniel overthrew and killed, is lost-consumed by the great Pacific firedrake secretly assembled by Daniel's half-brother, Paul.

But Sam is still alive and aware, in magical form, trapped inside the dragon as it rampages around Los Angeles, periodically torching a neighborhood or two.

Daniel has a plan to rescue Sam. It will involve the rarest of substances, axis mundi, pieces of the bones of the great dragon at the center of the Earth. Daniel will have to go to the kingdom of Northern California, boldly posing as his half-brother, come to claim his place in the competition to be appointed Lord High Osteomancer of the Northern Kingdom. Only when the Northern Hierarch, in her throne room at Golden Gate Park, raises her scepter to confirm Daniel in his position will he have an opportunity to steal the axis mundi-under the gaze of the Hierarch herself.

And that's just the first obstacle.