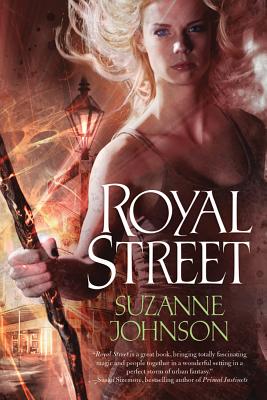 This is book number 1 in the Sentinels of New Orleans series.

A fun, fast-paced book, first in a series of urban fantasy novels filled with wizards, mermen, and pirates that are perfect for readers of paranormal fiction and "fans of Charlaine Harris and Cat Adams" (Booklist). RT Bookreviews agrees that "for readers missing Sookie Stackhouse, this series may be right up your alley."

As the junior wizard sentinel for New Orleans, Drusilla Jaco's job involves a lot more potion-mixing and pixie-retrieval than sniffing out supernatural bad guys like rogue vampires and lethal were-creatures. DJ's boss and mentor, Gerald St. Simon, is the wizard tasked with protecting the city from anyone or anything that might slip over from the preternatural beyond.

While winds howled and Lake Pontchartrain surged, the borders between the modern city and the Otherworld crumbled. Now, the undead and the restless are roaming the Big Easy, and a serial killer with ties to voodoo is murdering the soldiers sent to help the city recover.

To make it worse, Gerry has gone missing, the wizards' Elders have assigned a grenade-toting assassin as DJ's new partner, and undead pirate Jean Lafitte wants to make her walk his plank. The search for Gerry and for the serial killer turns personal when DJ learns the hard way that loyalty requires sacrifice, allies come from the unlikeliest places, and duty mixed with love creates one bitter gumbo.

Suzanne Johnson lives in Auburn, Alabama, and works as associate editor of Auburn Magazine. She is a veteran journalist with more than fifty national awards for writing and editing nonfiction. She is the author of the urban fantasy novels Royal Street and River Road.

“Equal parts paranormal romp and homage to NOLA, I raced down Royal Street. Not only is this book an enchanting urban fantasy debut, but it's also one of the most sensitive and honest depictions of post-Katrina NOLA I've read.” —Nicole Peeler, author of Tracking the Tempest

“Rarely has an urban fantasy so moved and entertained me on the very same page! Royal Street offers an insider's view of post-Katrina New Orleans, in all its heartache--and all its heart. A witty, resilient heroine and an irresistible cast make this a sure hit with fans of Charlaine Harris and Jim Butcher.” —Jeri Smith-Ready, award-winning author of the SHADE and WVMP RADIO series